Those of you who are brave enough to run Windows 7 RC at work, in a domain environment, as a systems administrator will be interested to know that Microsoft has released updates for the Remote Server Administration Tools package for Windows 7 RC.

These tools allow system administrators to manage remote, network connected, Windows servers and services such as Active Directory, Group Policy, File & Print servers, etc, from a Windows 7 machine. Microsoft previously made a beta version of their RSAT tools available for users of Windows 7 Beta. RSAT for Windows 7 RC also includes special Server Manager tools for managing roles and features on a computer that is running either the full or Server Core installation options of Windows Server 2008 R2, which will be released along side Windows 7.

Administrators who made the switch to Vista shortly after its release were disappointed to find out that Microsoft did not have any functional remote administration tools at the time of the release. Microsoft did not release the RSAT for Vista until Service Pack 1 was released in February of 2008. Previously users of Windows 2000 or Windows XP used the "adminpak" which was not compatible with Windows Vista. That Microsoft is developing the new RSAT tools along with Windows 7 is a welcome change for administrators who wish to make the change to Windows 7 as soon as it is released.

You must be either a member of the Administrators group on the computer on which you want to install RSAT, and Microsoft warns that you should remove any previous versions of RSAT that are installed on your system before installing this version, as it will fail to do an upgrade.

After downloading and installing the "msu" package, you'll need to enable the functionality of the RSAT package by opening the "Programs" area of the Windows Control Panel and then selecting Programs and Features > Turn Windows features on or off. In the Windows Features dialog box, expand Remote Server Administration Tools and select the remote management tools that you want to install. 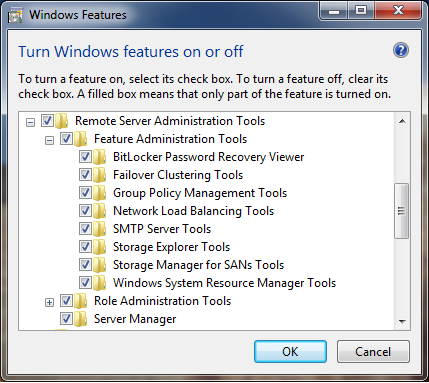 Both 32 and 64-bit versions of the tools are available, so be sure to select the correct version for your operating system as the package will fail to install otherwise.