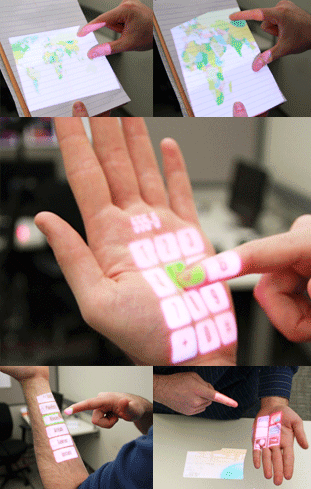 Science fiction movies and TV shows that show people using holographic touch interfaces on their PCs may be closer to reality than previously thought.  The official Microsoft Research web site has announced that it has been working on two different types of touch interfaces. One of them is called OmniTouch and enables nearly any kind of surface to be used as an user interface.

Microsoft's Hrvoje Benko said, "The surface area of one hand alone exceeds that of typical smart phones. Tables are an order of magnitude larger than a tablet computer. If we could appropriate these ad hoc surfaces in an on-demand way, we could deliver all of the benefits of mobility while expanding the user’s interactive capability."

The prototype is supposed to be wearable by a person, using a combination of a camera created by PrimeSense with a laser-based pico projector. As you can see from the pictures above, the projector creates the image of the user interface which can be interacted with via the camera. While the prototype camera is pretty bulky to use, the web site claims the projector and camera combo could be made as small as a matchbox at some time in the future. 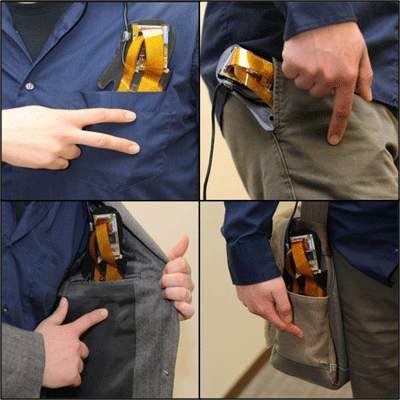 Another way of creating a different kind touch interface is called PocketTouch. It's a design that allows a smartphone or other device to be accessed without the user taking it out of his or her pocket. The site says, "It uses the capacitive sensors to enable eyes-free multitouch input on the device through fabric, giving users the convenience of a rich set of gesture interactions, ranging from simple touch strokes to full alphanumeric text entry, without having to remove the device from a pocket or bag." You can see examples in the pictures above.

So how does this process work, especially since smartphone users generally have no idea how their device is oriented in their pocket or bag? The site says, "The team resolved this by using an orientation-defining unlock gesture to determine the coordinate plane, thus initializing the device for interaction. Once initialized, user orientation can be from any direction as long as it’s consistent. PocketTouch then separates purposeful finger strokes from background noise and uses them as input."