Microsoft’s stock price has had a significant drop despite the company’s seemingly successful quarterly results.

While closing pretty much where it opened Microsoft’s stock took a nosedive in after hours trading and has lost more than 4% of its value in the last few hours. This comes after the company detailed its most recent financial results.

According to yesterday’s results Microsoft had a very strong, if not outstanding, quarter with many of its divisions showing growth. Its hardware business, though still small, showed significant upticks while transitioning products such as Office showed strong and important continued trends. The company’s revenue is high, it’s operating income is slightly down but still in great shape while its reserves, by a rough calculation, are higher than ever. 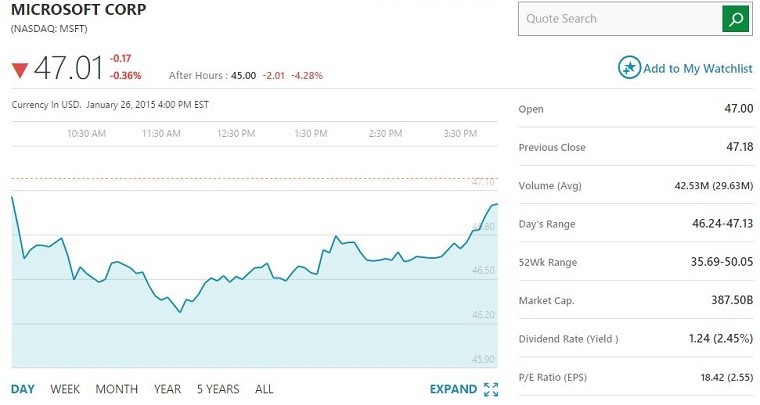 So why the drop in share price? Simple: Windows. Windows revenue declined significantly during this quarter thanks in large part to people having already moved away from XP – that major change of OS version in business environments has slowed significantly.

Also to blame is a general slowdown of the PC market in recent years, new low-cost licensing SKUs for educational and academic institutions, and the general dislike for Windows 8.

Now all these problems are here to stay for the foreseeable future and combined with the idea that Windows 10 will be a free upgrade for almost everyone – we still have to learn about Microsoft’s plans in the enterprise on this front though – you start seeing why investors are getting panicky.

Despite having numerous other billion-dollar businesses, Microsoft is still viewed as the creator of Windows and the company will have to prove to everyone that it can shift away from its licensing model if it is to succeed. Until it does that, the markets will be jittery.