Editor's note: Please refer to the news updates at the end of the article. The account was suspended because of an earlier image that violated Microsoft's code of conduct, not because of the image of a police officer holding a US flag. Microsoft's full statement to Neowin can be read at the end of this article. Original story follows:

Slightly over a week ago, Microsoft rolled out an update for the Xbox One, bringing a number of new features, one of them being the ability to add custom Gamerpics.

While many have been enjoying the creativity that custom Gamerpics invite, it appears that a controversy regarding the feature has popped up already.

Apparently, Microsoft suspended a police officer's Xbox Live account simply because the person used a seemingly-harmless picture of a cop holding a US flag as their Gamerpic. Said picture can be seen below: 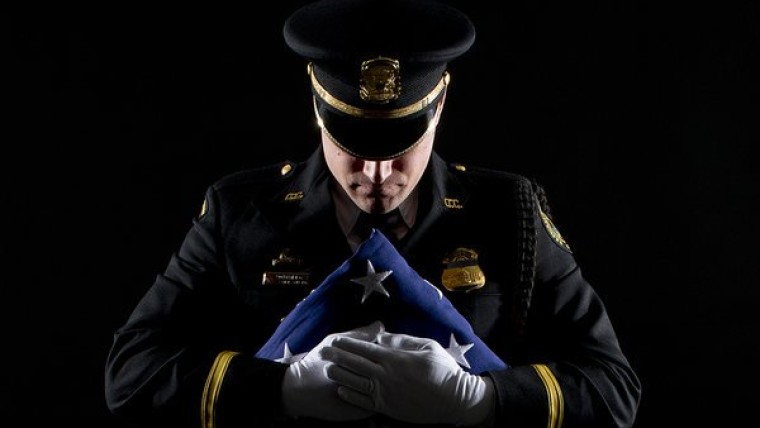 According to law enforcement official Michael Lee, he found out a couple of days ago that his Xbox Live account had been suspended for 24 hours by Microsoft because he used the picture above as his Gamerpic. He says that:

So last night Xbox Live decided to enact enforcement for having this as my gamer pic. I tried to find out which rule it violated with a customer service representative. That met with the last message he sent me basically stating to avoid this don't post any photo of police or military related to avoid this further.

While a specific reason wasn't offered regarding the enforcement of this suspension, Lee was provided a generic statement saying that his "Gamerpic may include nudity or lewd material, extreme violence, profane or offensive terms or gestures, or other content designed to sound like, look like, reference, or allude to these topics."

Understandably upset, Lee reached out to Microsoft's Xbox Live support to find out the reasoning behind the company's rather extreme action. However, he received a considerably insensitive response from the support representative who stated that he would not be able to appeal against the decision and that he should not use similar photos as Gamerpics in the future. The full response from the support representative can be seen below:

Thank you for your kind understanding. I really understand that you want some clarifications with regards on your suspension about a police holding a flag. However, you can only get in touch with the Enforcement team by submitting a case review on them. Since your suspension is only 24 hours, You are not able to file any case review with regards on the Gamerpic about the police. I do recommend that you refrain from putting any police or military photos to avoid this happening again.

You can check out photographic evidence on Lee's Facebook profile.

This rather harsh measure doesn't appear to have done Microsoft any good, with the Blue Lives Matter organization already claiming it to be the "world's worst customer service response". We have reached out to Microsoft for clarification of the matter, and will update if it responds.

Update 1: In an apparent twist in tale, Lee has now updated his statement, saying that his account was apparently banned for accidentally using a picture of "a woman holding a flag" as his Gamerpic. He claims that the suspension took time to process, by which he had already replaced his Gamerpic with the one depicted in this article. His full statement reads as follows:

So for everyone to know. Apparently, the ban was for a picture of a woman holding a flag that I had accidentally clicked on and immediately changed to the officer picture. It took a little bit for the ban to process and even after being in a chat with a friend about the Police Gamer pic. I was sent the ban on the prior picture. Not the police one. I still don't know why the representative told me what he did on the last pic with the chat with him. And still haven't been able to confirm this. But this is why I wanted to know why the account had been banned. And still haven't heard anything directly from Xbox either.

Nothing to see here, folks.

Update 2: Microsoft has now reached out to Neowin with a statement, emphasizing that the suspension was enforced because of an earlier image, not the one of the police officer. A Microsoft spokesperson had the following to say:

Images like the one described by this user would not be removed from our service or subject to enforcement action. Every image uploaded to our service is subject to our Code of Conduct and may be reviewed for compliance. Images violating that code can result in enforcement action against the user’s account, which may prevent any images from being uploaded for a short period. Our investigation found that this user had previously uploaded a different image not in compliance with our Code of Conduct, and the resulting enforcement action prevented the user from uploading further images for a short time.