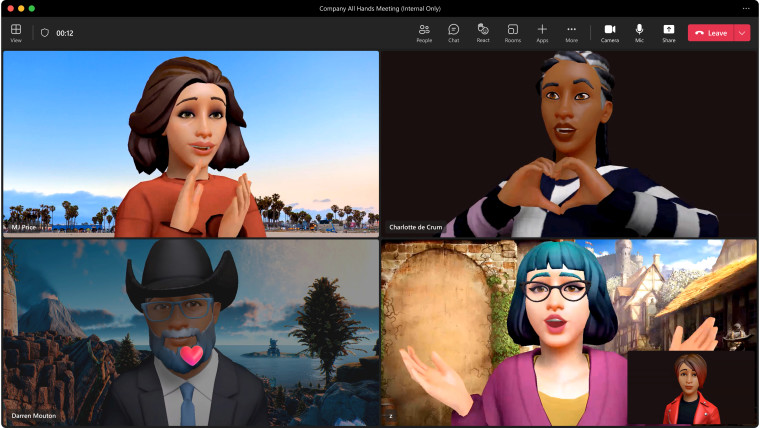 At its developer-oriented Ignite 2022 conference, Microsoft has announced a range of new features that will not only interest developers, but also consumers and enterprise customers.

For starters, Mesh avatars are now available in private preview for Teams. This is something Microsoft announced almost a year ago. Basically, Mesh enables users to utilize personalized 3D avatars that can join Teams meetings and interact with each other in an immersive space. It won't require users to turn on their cameras but interactive methods such as eye contact and live reactions will be offered for those who prefer a non-robotic interaction. Avatars can created through the Avatars app in the Teams App Store.

A Teams Premium SKU is also hitting preview in December 2022. New capabilities in tow include meeting guides, branding for meeting experiences, intelligent search, recap, and playback, AI-generated tasks, personalized insights, live translations for captions, advanced meeting protection, advanced webinars, and advanced virtual appointments. This will be available as an add-on preview in December. Pricing details are currently unavailable but general availability is scheduled for February 2023. The AI features have a broader "first half of 2023" release window though.

Microsoft has outlined enhancements to existing Teams features too. It has stated that Cameo for Teams is generally available, Excel Live in a Teams meeting window is coming later this month, and that organizers will have more control over the Together mode view for all participants along with the ability to assign seats.

Teams Phone Mobile is now generally available thanks to Microsoft partnering with several global telecom operators. It's currently available in a few countries and select telcos but Microsoft is working on expanding the capability. You can find out more details here.

Some other new and upcoming Teams features also include the following:

Furthermore, Microsoft is improving the channel experience in Teams by moving the compose box to the top of the page, pop out conversations, pin posts, and enjoy a more streamlined info pane. Channels will also be made customizable with branded headers, and multiple post types for different occasions and milestones.

On the partners side, Microsoft Teams meetings will be available natively across certified Cisco meeting devices on a rolling basis. Microsoft is also continuing to work with independent software vendors (ISVs) such as 3M, SAP, iHeartRadio, Workplace by Meta, ServiceNow, Zoho, and more for collaborative Teams apps.

But talking about first-party commitment to Teams apps, Microsoft has announced the Places app for Teams. The hybrid workforce management and collaboration app is coming soon in preview with the following functionalities:

Finally, for developers, the Teams Live Share SDK to build custom collaborative experiences is now in preview and the Teams Toolkit is now officially a part of Visual Studio, which should streamline the integration process for developers in this domain.