Microsoft UK has announced, via Twitter, a “special event” on October 5th in London for developers in which the company will talk about “Windows Azure, Windows 7 and the soon-to-be-released Windows Phone 7 and IE9”. Interestingly Steve Ballmer will introduce the opening keynote for the special event and it will be held in the large International Conference Centre (the G20 was held there last year and Microsoft has used the venue before). 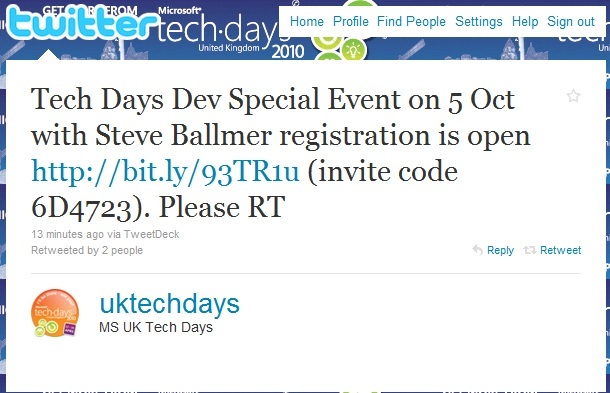 It is understood that the event will be a Tech Day Special Event with an emphasis on "the cloud". However, it is unusual for Steve Ballmer to keynote a developer event unless he is in town for something else. It is possible that Steve Ballmer might be making an announcement earlier in the day in London and then keynoting the special event later in the day or will have a major announcement to make at the event. With such a big venue, Steve Ballmer giving the keynote at a developer event, and Windows Phone 7 rumoured to be launched in Europe in October - it is speculated that on October 5th Microsoft could announce the availability of Windows Phone 7.

You can view the information of the event here, you will need to use this invitation code (6D4723 ).

Neowin reached out to Microsoft for comment but officials were unable to confirm the exact schedule for the event.