Microsoft launched the Xbox One console in November that included a way to download its own version of Skype. Today, the company announced that the first major update for the Skype Xbox One app is now available, with a number of improvements but lacking one long promised feature. 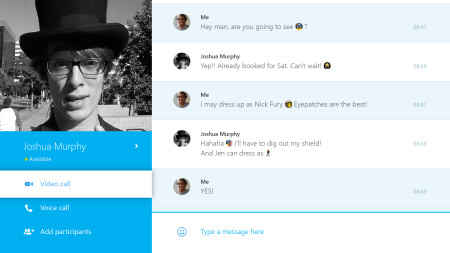 The Skype blog goes over the new features for the Xbox One app.  Microsoft says, "Improved chat is now synchronized and comes with push notifications, alerting you when a new message arrives, and providing a longer chat history – up to 1,000 messages, rather than just the past 7 days."

There's also a new tutorial feature in the Xbox One version, which helps first time Skype users with making chat and video calls. It also adds filters so that users can only see their contacts that happen to be online. New chat emoticons based on the upcoming movie "Captain America: The Winter Soldier" can now be used on the Xbox One Skype app. Finally, a number of unnamed bugs have been fixed.

Sadly, it appears that the once promised feature for the Skype app that would have allowed it to enter Snap mode on the right hand side to take a video call while still playing an Xbox One game in the main window has yet to be implemented. There's no word when, or even if, it will be included in an upcoming update.