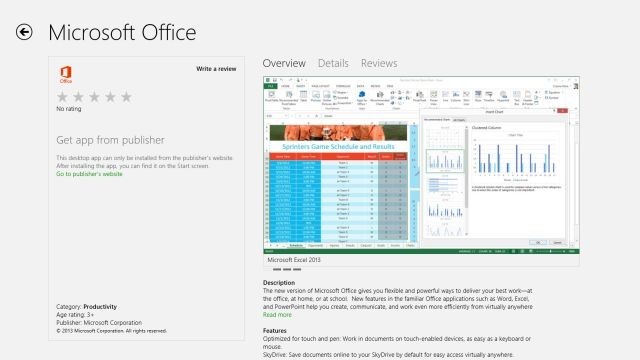 As we reported earlier today, Microsoft has now listed the newly released Office 2013 as a desktop app in the Windows Store section of Windows 8. However, most of the new software applications in the Office suite still run on the desktop UI of both Windows 8 and Windows RT.

So, where is the version of Office made to run on the 'Modern' UI of Windows 8 and RT. In an interview with Mashable, Microsoft's vice president of Office program management P.J. Hough, said the company does have plans to offer such a product someday. He stated, "We're committed to delivering a full set of Office experiences on Windows 8."

We've gotten a lot of experience from OneNote and Lync, and we're going to continue down that path ... How do you integrate with the new features of the operating system — the charms, for example? How do you take advantage of the new navigation? what do you do differently if you presume cloud-backed storage first? We've added a lot of those capabilities to Office, but we decided not to rush and just jam something in.

It's safe to say that Microsoft will launch full "Modern" Windows 8 versions of Word, PowerPoint and Excel at some point, but the question is, "When?" We suspect that it's going to be a long while before it happens.