When people surf the Internet on their web browsers, it's just a matter of time when they hit a page that has an online ad which then tries to install something on their computer. This week, the Microsoft Malware Protection Center team announced it will have some new criteria to define when such activity crosses over into the annoying. and sometimes malicious, adware side. 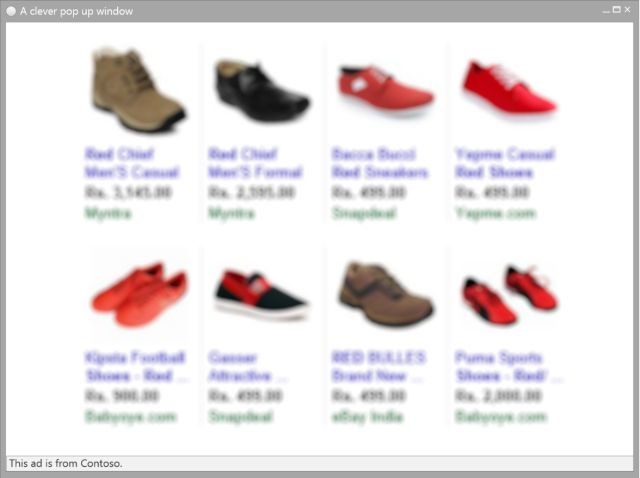 Pop-up online ads have to have a working close window, according to Microsoft's new adware policies.

In a blog post, Microsoft stated that online ads start to cross over into adware territory if they run programs on a user's PC and create "notifications promoting goods or services in programs other than itself." If that occurs, Microsoft states there must be a clear way to close such an ad, like a prominent "X" or a close button in, for example, pop-up ads.

Ads that show messages such as "Your PC performance is poor" must also clearly mention they are ads and not suggest they are in fact warnings generated by a PC, under the new rules. Finally, if a program is installed via an online ad on a computer, there must be a clear way to uninstall it. Also, the name of the program in the uninstall listing must exactly match the name that's shown in the ad.

The new adware policies will go into effect on July 1, in order to give online ad companies time to change their programs. After July 1, if an ad is detected by Microsoft's online security programs that is considered adware, it "will immediately stop the program and the user will be notified. The user then has the ability to restore the program if they wish."