Microsoft's massive 2013 fine from the European Union is the center of a new lawsuit against the company's board of directors. Reuters states that the lawsuit was filed on Friday by a shareholder of Microsoft, Kim Barovic, who claims that the board and company executives mismanaged the situation that led to the fine, which involved Microsoft breaking its 2009 agreement with the EU over its Internet Explorer web browser. 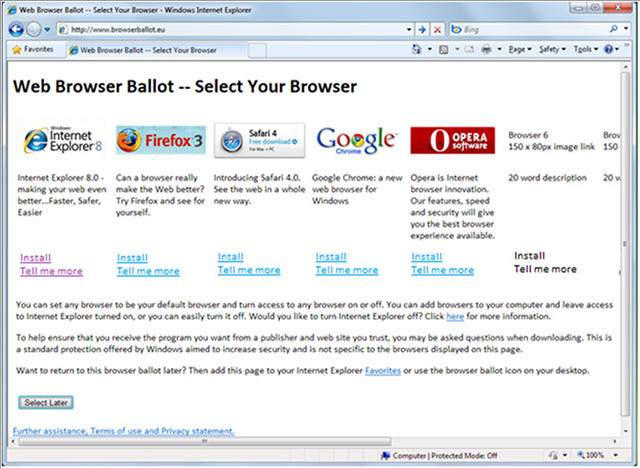 During that year, Microsoft made a deal with the EU to give owners of Windows-based PCs a ballot that would display many different web browsers to download, including Microsoft's own Internet Explorer. However, Microsoft later admitted that a "technical error" did not display the required browser download ballot on a number of PCs in Europe for a lengthy period from 2011 to 2012.

The EU was not pleased that the agreement had been broken and in March 2013 it fined Microsoft 561 million euros, or $732 million. Reuters reports that in her lawsuit, Barovic said she asked Microsoft to investigate how the "technical error" took place and take action against any board members and executives who had not performed their duties. Microsoft later replied to her that they found no cause to take action against any current or former board members or executives. Now Barovic is suing the board, claiming their investigation was insufficient.

In its own statement, Microsoft said:

Ms. Barovic asked the board to investigate her demand and bring a lawsuit against the board and company executives. The board thoroughly considered her demand as she requested and found no basis for such a suit.

In 2012, Microsoft did not pay the full amount of bonus money that could have been received by CEO Steve Ballmer and Windows division head Steven Sinofsky during that year. This was due to what the company's board said was the "Windows division's failure" over the lack of a web browser ballot for some European PCs. Neither Ballmer nor Sinofsky work at Microsoft anymore, although Ballmer is still a member of its board.