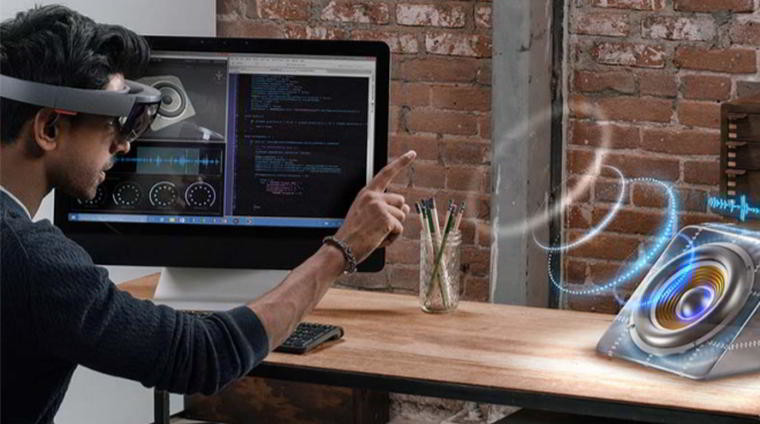 We see patent holding companies wielding infringement suits a lot as a way to make quick money off big companies not wanting to spend a lot on court fights. However, Microsoft is the target of a new suit filed earlier this month by a Connecticut-based company over its HoloLens technology that allegedly infringes on two holographic-image patents that have been around for more than 10 years. What's more, this is likely only the first salvo of suits related to the patents.

HoloTouch deals in "human-machine interface technology," or a way for humans to interact with machines or devices without actually touching them. The company has filed suit in the Southern District of New York, alleging that Microsoft has willfully infringed on the two patents and is seeking a jury trial and triple damages, which is allowed if the jury finds that Microsoft knew that it was infringing on the patents, and did so anyway.

The two patents, one from 2002 and another from 2004, relate to holographic images and interacting with them. Specifically, patent '238 deals with a "means by which an operator may control one or more devices without touching a solid control object or surface while still interacting with familiar controls that are visually perceived, such as a keyboard.” Patent '245 deals with holographic human-machine interfaces (HMIs) and covers an invention that is meant to allow "the reduction of the power consumption, size and weight of conventional holographic HMIs.” The latter, in basic description, sounds like an elementary precursor to current AR and VR headsets and technology.

Not only is the tech patented in the United States, it is also patented in Japan, Australia, Canada, the U.K., and with patents pending in the European Union.

The suit claims that HoloTouch works with original equipment manufacturers (OEMs) to design and build prototypes using the patents. It offers licenses for the technology, and even approached Microsoft about partnership using the tech back in 2006. Microsoft did not respond to the overture.

The "willful" aspect of the suit comes into play in 2013, when Microsoft allegedly filed its own patent in 2013, "citing HoloTouch’s patents as prior art." If accurate, this is key in showing prior knowledge. The suit alleges that in November 2015 and again in January 2016, HoloTouch contacted Microsoft about licensing the patents. This time Microsoft did respond, saying it had reviewed the patents, but no licensing deal ever materialized.

The suit goes into extra detail about how HoloLens appears to infringe on the patents, pointing to each claim of the patent and pointing out the specifics of the HoloLens technology that applies.

"Our company will vigorously pursue its statutory remedies against all who take advantage of our innovative technology without the compensation provided by law, particularly in light of current fascination with touchless, holographic controls and operation of devices using them across commercial spectra," the company said in a press release.

It appears that Microsoft may be the first of many in the AR/VR space targeted by HoloTouch. The company said that other similar lawsuits are currently being prepared, and will be filed soon against other as-yet unspecified companies.

HoloTouch was founded in 2002. The company site says that holographic light switches using its technology are installed at Greenwich Hospital and Yale-New Haven Hospital in Connecticut "where durability and hygiene are critical issues."

R. Douglas McPheters, president of HoloTouch, told Neowin that the company does not comment publicly on pending litigation or internal business practices. A Microsoft rep appreciated being shown the suit, but said the company had nothing to say at this time.