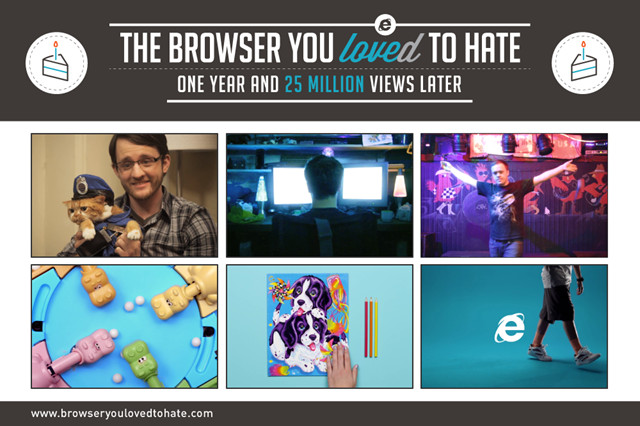 One year ago today, Microsoft launched a Tumblr website that at first went unnoticed by many: "The Browser You Love To Hate". Since then, the website has played host to messages and, yes, interesting videos that tried to show the public that Internet Explorer is "hip" to use again even in the face of competition from Google's Chrome, Mozilla's Firefox and others.

Today, the official IE blog stated that since the Tumblr website launched, the "Browser You Love To Hate" marketing campaign has generated 25 million total video views. It added, "Whether you were simply entertained or began to question your assumptions about Internet Explorer, we are happy to entertain and help people learn that something’s changed with IE."

The videos were certainly very creative, from the one where the man admits to the fact that IE9 is pretty good (and then comes out with "Officer Cupcake") to the guy in front of his desktop screen who keeps typing "IE SUCKS" on his Twitter page until he comes to realize that it sucks ... less.

With the launch of Internet Explorer 10 for both Windows 7 and Windows 8, it's likely that Microsoft's marketing for IE will be switching over to promoting IE10 from now on. It will be interesting to see what the company comes up with next to help boost awareness of IE10.