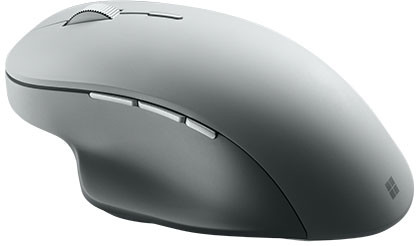 Last month alongside the release of the Windows 10 Fall Creators Update, Microsoft also announced some new hardware, including the Surface Book 2 and the Surface Precision Mouse. Today, those devices are finally available for pre-order.

The Surface Precision Mouse includes some features that you won't find on your standard mice. As you can see from the image, there are three buttons on the side of it. You can set them to do pretty much whatever you want, such as launch an app, execute a macro, or save a document.

There's also support for multiple devices, meaning that it can be paired with up to three PCs. This should allow it to work seamlessly across those devices. Unfortunately, the customizable buttons and multiple device support doesn't work on Windows 10 S, since it requires additional software that doesn't come through the Windows Store.

But if Bluetooth isn't your thing, there's an option to use the Surface Precision Mouse via a micro-USB cable. Of course, there's no way to use a wired connection with all three devices at once. That would make for some complicated cable management.

You can find the Surface Precision Mouse on the Microsoft Store here, priced at $99.99.