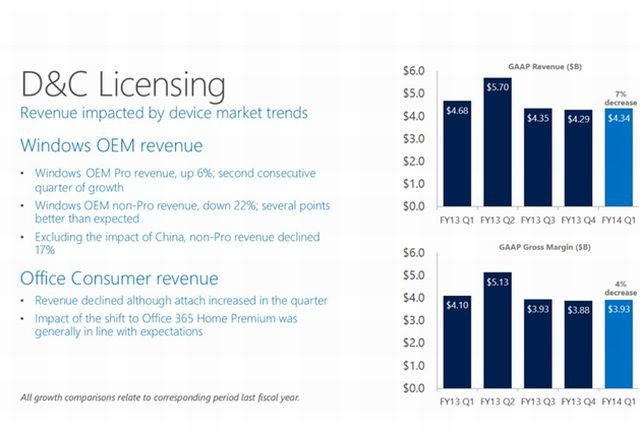 On Thursday, Microsoft announced solid financial results for its first fiscal quarter of 2014 (Q3 2013 for the rest of us) with $18.53 billion in revenues and $5.24 billion in net income. However, the company did note that Windows OEM revenues went down by seven percent for the quarter.

That might sound like bad news, but the truth is three months ago, Microsoft predicted that the amount of money it would get from OEMs would go down in the mid-teens, percentage wise. In the company's conference call with analysts Thursday, Microsoft's chief financial officer Amy Hood said that it is seeing "signs of stabilization in the business segment" in terms of PC sales which likely helped out with revenues.

Microsoft's own slide shows that Windows OEM Pro revenue went up by 6 percent in the last quarter, but non-Pro revenue went down by 22 percent, which Microsoft says was still better than expected.

The news comes on the heels of reports from IDC and Gartner that showed PC shipments declining in the last quarter but not as badly as first predicted. While it's still too early to say that the PC industry is improving, all of this news is encouraging and could add up to good news for Microsoft, and its Windows business, in the long run.