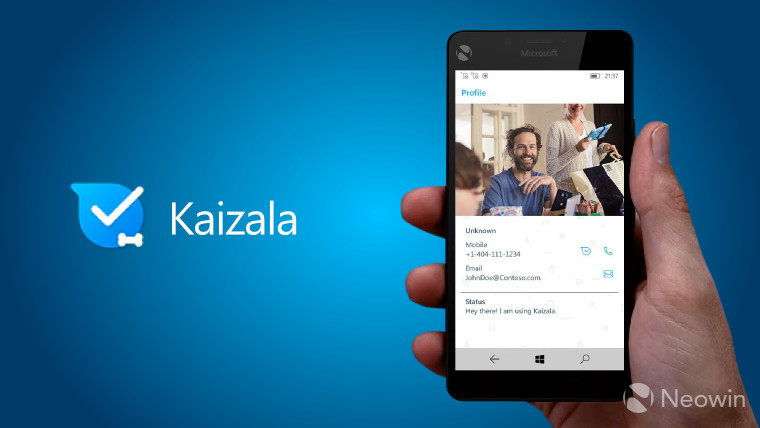 A year ago, to the day, Microsoft's experimental Garage unit launched its Kaizala app on Android. The app made its way to iOS last June, and now, it's finally available for Windows 10 PCs and phones.

Kaizala was designed primarily for small and medium-sized businesses in emerging markets, launching initially in India. But the app's versatility has seen it adopted in a far wider range of scenarios, from making arrangements within small communities of friends and hobbyists, to supporting regional government in day-to-day organization of tasks and events.

Microsoft describes Kaizala as "a simple and secure chat and productivity app that enables users to achieve more", adding:

With Kaizala Preview, you can have 1:1 chat with individuals, group chat with your teams, and even add groups to your existing groups to communicate within large organizations or communities.

In these chats or groups, you can not only send messages, but also send Kaizala Actions like Job, Poll, Survey to individuals or to the entire group. People can easily respond to Kaizala Actions, and all responses are consolidated, stored and presented for easy viewing and decision making. Therefore, Kaizala Preview makes you more productive instantly.

Key features of the app, according to its Windows Store listing, include:

The app is officially being released in preview form on Windows 10 phones and PCs. While the Windows Store listing explicitly states that the app is compatible with Windows 10 PCs - also specifying x64 and x86 app compatibility - the system requirements also state that it needs "integrated touch". However, we've so far been unable to install the app on any Windows 10 PC, with or without touch, including Microsoft's Surface Pro 3 and Surface Book.

Earlier this month, at its NexTech Africa conference in Nairobi, Microsoft announced that Kenya would be the second market to join its Kaizala Insider Program, following the launch of that program in India yesterday.