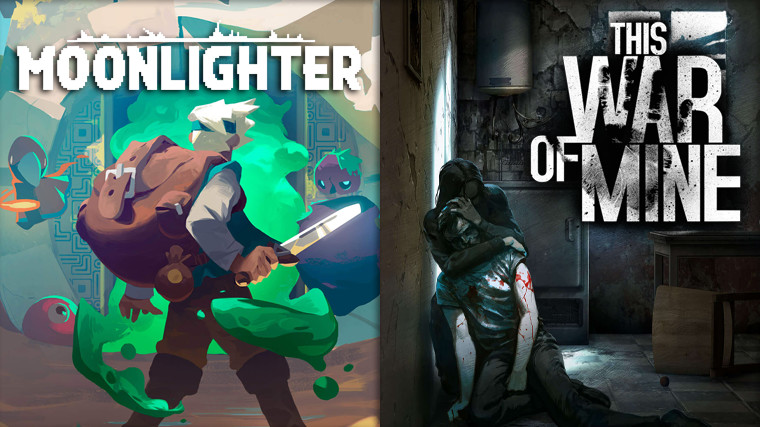 Epic is putting on offer not one but two games this week, taking the place of Limbo; both published by 11 bit studios, Moonlighter and This War of Mine are free to claim on the Epic Games Store.

Moonlighter is an action RPG with a touch of rogue-like, developed by Spanish indie studio Digital Sun. It puts players in the shoes of a shopkeeper, who happens to also be an adventurer. Originally released in May of 2018, the game garnered favorable reviews from critics and players alike and won the award for 'Best Indie Game' category at GDC 2018. Here's how the Epic Games Store describes the title:

During a long-passed archaeological excavation, a set of Gates were discovered. People quickly realized that these ancient passages lead to different realms and dimensions – providing brave and reckless adventurers with treasures beyond measure. Rynoka, a small commercial village, was founded near the excavation site providing refuge and a place for adventurers to sell their hard-earned riches.

This War of Mine is of the survival genre, pitting players against the dilemmas that tend to pop up during the tiring times of a brutal war. Instead of focusing on the combat, This War of Mine presents a unique take by focusing on the civilian experience of a war. Originally released in November 2014, the game received acclaim across the board. Here's how the Epic Games Store describes the title:

In This War Of Mine you do not play as an elite soldier, rather a group of civilians trying to survive in a besieged city; struggling with lack of food, medicine and constant danger from snipers and hostile scavengers. The game provides an experience of war seen from an entirely new angle.

The pace of This War of Mine is imposed by the day and night cycle. During the day snipers outside stop you from leaving your refuge, so you need to focus on maintaining your hideout: crafting, trading and taking care of your survivors. At night, take one of your civilians on a mission to scavenge through a set of unique locations for items that will help you stay alive.

Make life-and-death decisions driven by your conscience. Try to protect everybody from your shelter or sacrifice some of them for longer-term survival. During war, there are no good or bad decisions; there is only survival. The sooner you realize that, the better.

Epic Games Store is offering both titles at no cost for players on Windows and macOS. It's worth noting, however, that they are also available for Linux via Steam. Moonlighter is discounted by 50% to $9.99, while This War of Mine will set you back by $19.99, at the time of writing. Here are the minimum requirements for the games:

If you wish to claim Moonlighter or This War of Mine, you can find them here. They will be free to claim until August 2, which is when Epic will put on offer Alan Wake and For Honor for its next giveaway.