When the first leaked build of "Windows Blue", later revealed as Windows 8.1, was posted to the Internet several weeks ago, a mysterious new app, called Movie Moments, was part of the build. Unfortunately, the app was not in working condition in that build so it was unclear what features it had.

Now, some screenshots of another leaked build of Windows 8.1 have been posted to the Internet and one of them shows an updated version of the Movie Moments app. WinClub.pl posted the screenshot earlier this weekend. 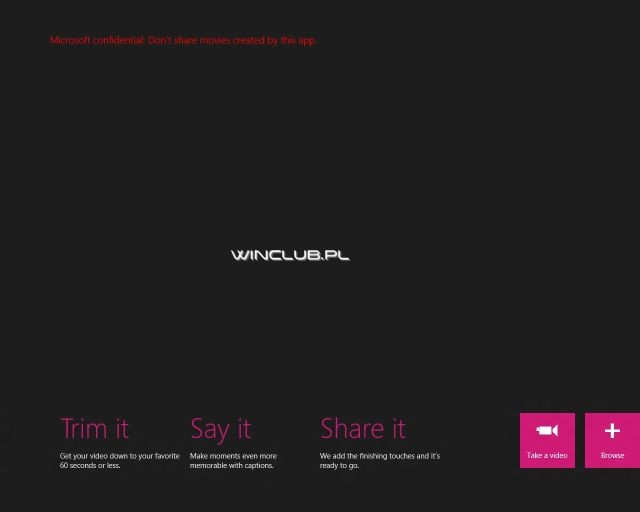 The screenshot now shows some menu options; Trim it, Say it, and Share it, along with brief descriptions of each selection. Clicking on the "Trim it" choice will apparently allow users to edit down videos to their favorite moments of 60 seconds or less. The "Say it" option will offer a way to put in captions in any video.

The "Share it" option is still somewhat murky as the menu description claims that the app will "'add the finishing touches and it's ready to go". It's possible that the Movie Moments app will handle some or all of the editing of the movie clip before letting users share it with others.

Microsoft is apparently working on quite a few new Modern apps for the launch of Windows 8.1, including an alarm, calculator, and sound recorder.