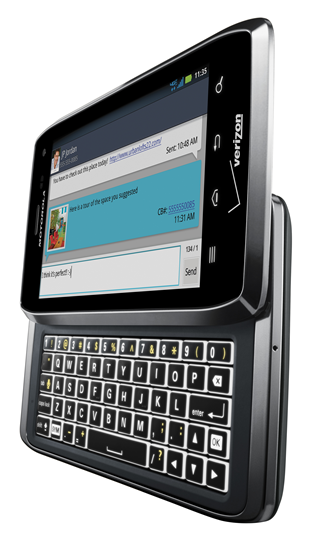 Motorola decided to take the opportunity to reveal not one but two new Android powered smartphones during CES 2012. One of them is the Droid 4, the fourth version of Motorola's physical QWERTY keyboard-based phone line up.

The Droid 4 packs in a dual core 1.2 Ghz processor along with 1 GB of RAM, a four inch screen, 16 GB of on board storage with expansion up to 32 GB, an eight megapixel camera, support for LTE networks and more. While the Droid 4 will ship with Android 2.3, Motorola is promising it will be updated to the new Android 4.0 operating system.  Verizon Wireless will sell the Droid 4 "in the coming weeks" but pricing was not announced.

Motorola also announced the Droid RAZR MAXX during CES 2012. This is the new version of the thin Droid RAZR smartphone that was first launched in November. The new Droid RAZR MAXX's biggest new feature is its battery life. Motorola claims that it will let users chat on the phone for 21 hours on one charge. The Droid MAXX will also come with 32 GB of memory and will be sold "in the coming weeks" by Verizon for $299.99.

Motorola also announced a purple version of the original Droid RAZR with 16 GB of storage and a price of $199.99. Both phones are also scheduled to get Android 4.0 software updates.