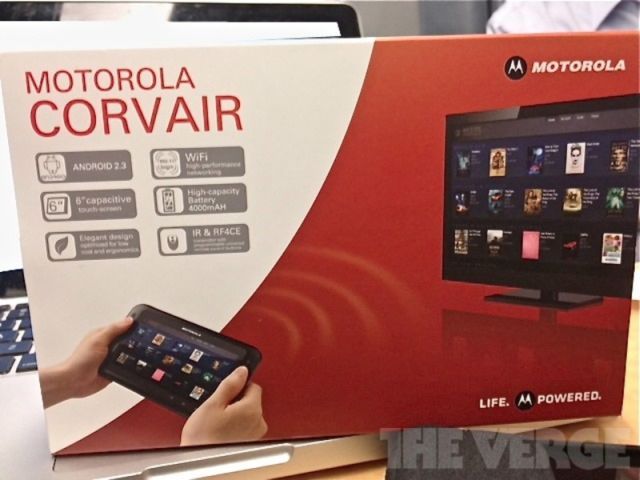 Motorola doesn't just make smartphones and tablets, it also makes cable television set-top boxes and DVR devices for cable TV providers. Now The Verge reports that Motorola is working on a new tablet device called the Corvair that's being designed as a kind of advanced remote control for those cable TV boxes. The article says that the Android-powered tablet is currently in testing with cable TV providers.

Not much is known about what's inside the Corvair. The image above says that it has a six inch touch screen and that it uses Android 2.3; it also has WiFi support along with IR control and RF4CE. However, images from the device indicate that in addition to serving as a TV remote, the touch screen can also stream video from the television. It's possible that the tablet could stream video from one TV channel while showing another channel on the big screen.

The truth is that the basic design for the standard TV remote hasn't changed a lot over the past few decades: most remotes still use physical buttons in layouts that can be hard to use by TV customers. Creating a remote that resembles a smartphone or tablet, complete with a user friendly touch screen interface, seems like a natural fit. Indeed, Google TV devices can be controlled via a free Google TV app for Android and the iPhone.