Research In Motion (RIM) has not had a good year, and the news just keeps getting worse. This week, the value of the BlackBerry maker’s stock fell below ‘book value’, signalling a troubling new chapter in the company’s story.

In layman’s terms, this means that the total value of RIM’s shares (also known as its market capitalisation) became less than the actual value of the company’s assets (cash, patents, buildings, stock, equipment etc) minus its debts.

Last quarter, RIM had a book value of $18.92 per share; at its lowest point this week, RIM shares dropped as low as $18.20 in active trading on Nov 3. By the end of the week’s trading, they’d clawed back some of their loss, closing at $18.97, just a hair above book value.

So... who cares, right? Well, this may not seem like something to care about, but this is a very big deal for RIM. When market cap falls below book value, it effectively means that the company’s own investors see the company as being worth less than the sum of its parts. The bigger problem is that it indicates the wider market has no confidence in the company and its long-term prospects, and that could be a major headache if RIM’s increasingly stumbling management decide they want to put the company up for sale.

It’s no secret that RIM has had a terrible year. The company’s PlayBook tablet got a lukewarm reception, catalysed by issues such as the bizarre exclusion of a native email client. RIM recently announced an embarrassing delay to its next update for the PlayBook OS, meaning it won’t deliver email to the device until February 2012 at the earliest, almost a year after its launch (and it now won’t bring the BlackBerry Messenger (BBM) service to the device in that update at all).

In August, RIM hit the headlines for all the wrong reasons as it emerged that the wave of riots and looting that began in London and spread to cities across the UK had been extensively coordinated through BBM.

Last month, the company then blundered its way through a PR disaster of its own making as its services went offline across much of the world for four days, due to a botched system upgrade that also saw the failure of the system’s redundancies; RIM’s delays in acknowledging the problem and keeping its customers informed didn’t do it any favours, nor did the fact that service was fully restored only a day before the iPhone 4S went on sale. 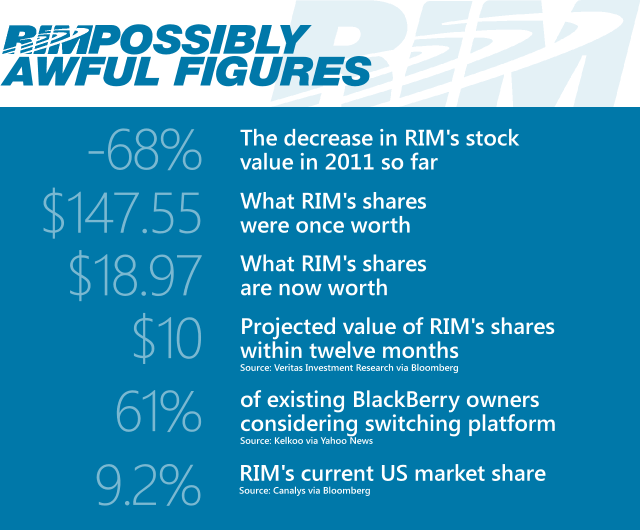 While the company’s fortunes clearly lie in the transition of its phone portfolio to its recently announced BBX operating system, the first phones with this OS are still months away. Until then, RIM will be stuck selling products that are clearly failing to excite buyers, given the company’s catastrophic decline in market share (two years ago, RIM had 46% of the US smartphone market – now it has just over 9%).

The decline of RIM's share value this week may not sound like a big deal on the face of it, but in the broader context of the company’s performance, its prospects look exceptionally bleak. The evident lack of confidence in RIM among both investors and consumers is a very real and immediate problem that the company may find it is simply unable to resolve. With months to go until the company’s hero products are due to arrive, that’s a long time for RIM to try to hold its head above the water.

The company lost one of its largest investors in June following poor first quarter results. The continued decline in the company's performance may incite other nervous investors to start cashing out long before then, which would only push RIM’s share price down further, making it ripe for a takeover.

It seems that the possibility of RIM going under is starting to look very real indeed.