Mozilla has announced that advertisements will be displayed to all new users of its popular open-source Firefox browser.

The ads will occupy the square slots on the browser's 'New Tab' page until the user has begun browsing by themselves for a while and hence filled the slots with recent history or pinned favorite sites into the slots.

Mozilla has said in a statement on their 'Advancing Content' blog that it is a part of their attempt to enable new users of the browser to find popular sites, or sites that they may find interesting, more quickly and easily whilst also starting to turn Mozilla into a more profitable organization. They also say that the adverts will be clearly labelled as adverts so that users do not get confused and have released a mock-up of what they may look like on the screen, shown below. Darren Herman, Mozilla's vice president of content services, wrote in a company blog post that "The sponsored tiles will be clearly labelled as such, while still leading to content that we think users will enjoy". 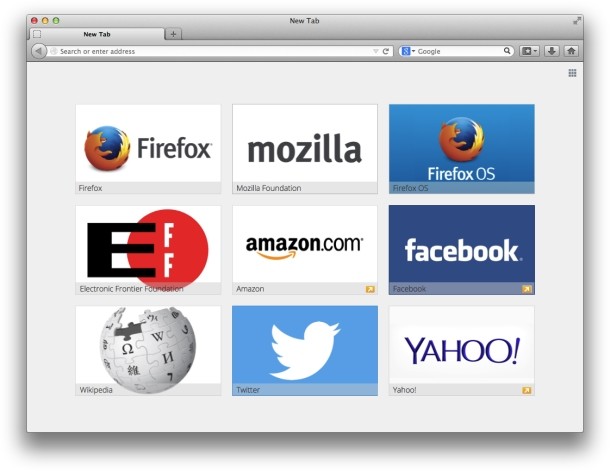 Mozilla's implementation of new 'Directory Tiles' advertisements into their Firefox browser is likely to look similar to this.

The advertisements will be called Directory Tiles and will use a combination of sponsored sites, popular sites based on the location of the user and news from Mozilla to fill in the nine boxes on the New Tab page until the user occupies them with media of their choice. The tiles will appear only to new Firefox users or to people who have re-installed their browser and will disappear once users have browsed enough to replace the Directory Tiles with content more relevant to the user; this process will take between 30-45 days for most new users, according to Mozilla.

"We wanted to get away from being this window into the web that doesn’t bring much value [to users]… We looked at it from the perspective of how much value are we bringing to the user? We're not focused on bringing the most revenue into Mozilla."

She went on to say that some people may become confused by Mozilla accepting sponsored ads onto its platform but added that it is really no different than the company taking sponsorship for its default search engine.

Mozilla has not yet stated when Directory Tiles will be implemented but in Darren Herman's blog post he has written that it will be "as soon as we have the user experience right". The change will be rolled out to Firefox on desktop OSes first before Firefox for Android and Firefox OS and Firefox will remain free to use and open-source after the change.