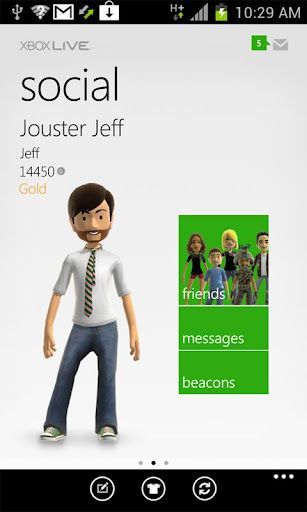 During E3 2012 last week, Microsoft officially announced Xbox Smart Glass, an upcoming mobile application for many different operating systems, including Android. Xbox Smart Glass, when it is officially released later this fall, is supposed to give its users many different ways to not only interact with their Xbox 360 game console but also to add new features to Xbox 360 games and other content.

While Xbox Smart Glass may still be a few months away, Microsoft has gone ahead and launched the first official Xbox app for Android users. The Google Play download store now has the free My Xbox Live app available for Android smartphones and tablets.

This new app will allow Xbox Live subscribers to, among other things, keep track of their Xbox Live Achievements and compare those achievements with people on your Xbox Live contact list, You can also change the appearance of your Xbox Live avatar. The app also gives users news on the latest Xbox 360 games along with tips and tricks.

Meanwhile, the iOS version of My Xbox Live, which was released in December, has gotten a major update today. The 1.5 version gives the app the added ability to serve as a remote control for the Xbox 360 for media content such as YouTube.