Great Scott! It's that time of the year already! October 21, 2015 is that date when Marty McFly and the genius professor Doc Emmett Brown of the movie 'Back to the Future 2' traveled into the future, seeing futuristic technology such as flying cars, hoverboards, self-drying jackets, self-tying shoelaces and so much more. While we aren't even that close yet on creating these kinds of gizmos, Microsoft has taken the time to commemorate this special day, while promoting its newest products along the way.

Visitors of Microsoft's US website are in for an out-of-this-world inspired treat. Type in 'OUTATIME' (without the quotation marks, not case sensitive) in the homepage, and you will be greeted with the movie's DeLorean time machine flux capacitor. A video of clouds will be shown next, wherein a flashing of lights are shown, an indication that something is coming, just like how it was portrayed in the Future movies. After this, a visitor will be taken to a page, stating "Great Scott! The future is precisely on schedule," a reference to Doc Emmett's line on the movie. 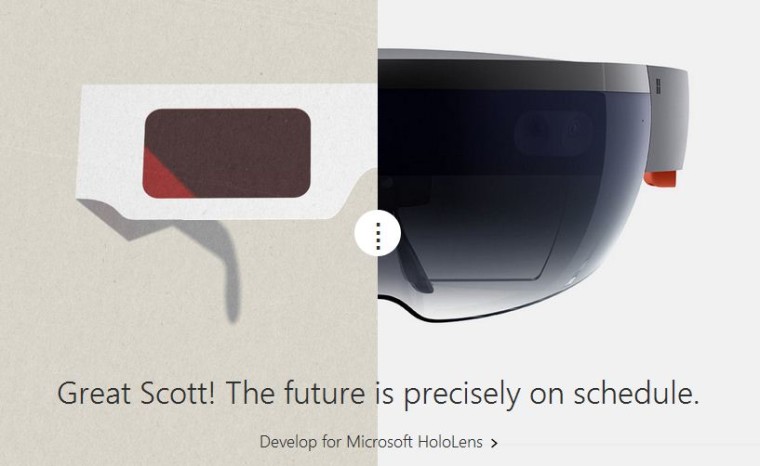 Microsoft's HoloLens and other products like the Band, Surface, Lumia, and the Xbox One will be showcased on the page, shown side to side with classic technologies. For example, the half of red/blue 3D glasses is placed beside the other half of its HoloLens device. You can move the circle with four dots on it, to see the glasses/HoloLens in its full glory (or we probably think this is to make us feel the transition from old to new technology more, and create nostalgia).

As a bonus, the page can be viewed in 3D. Click the "3D" button on the side of the page, and get your 3D glasses ready. We have tried viewing it by using the classic red/blue 3D glasses, and we have to admit, it's kind of fun!

Again, the feature only works on Microsoft's US website, which can be viewed here.