There are few occasions quite as solemn as a funeral. An opportunity to say a final goodbye to those we care about the most - or in some cases, those we pretended to care about so we could use their pool in the summer - funerals are generally quiet, dignified affairs, filled with poignant memories, a few tears here and there, and perhaps a few amusing stories about the deceased. If you're in the UK, however, it seems that there's a good chance you'll have been at a funeral where a smartphone has caused the kind of interruption that might have some spinning in their graves.

Research carried out by OnePoll for The Co-operative Funeralcare - which evidently takes such matters very seriously - looked into the phone-using habits of funeral-goers in the UK. It found that 40% of Brits staunchly refused to switch off their phone while at a funeral, and although 30% had the decency to put their phone on silent, a surprisingly high 10% decided it would be appropriate to leave their ringtones on during the service, leaving the door wide open for their Macarena or Crazy Frog ringtone to interrupt proceedings, loud enough to wake the dead. 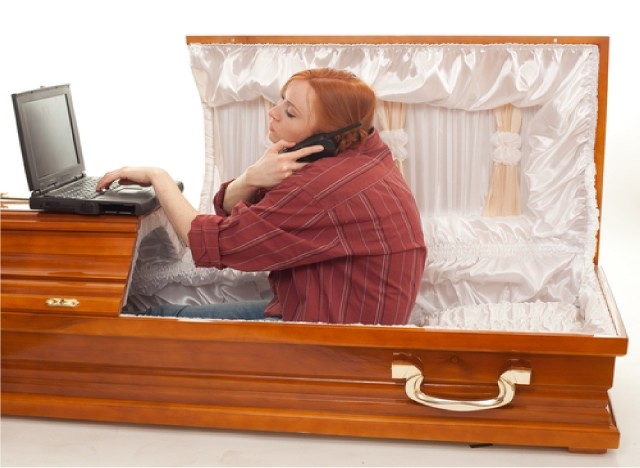 Those living in and around London and Manchester are the most likely to make or accept a call during a funeral, while those working in the transport and distribution industries are most likely - almost 30% of them - to refuse to turn off their ringtones during the service. 1 in 40 of those living in the East Midlands region admitted they'd filmed a funeral service on their phones.

What's perhaps most bizarre about the research - well, other than the fact that it was carried out in the first place - is that a funeral was clearly identified by respondents as the most inappropriate place to use a phone, with 70% identifying it as such. Regardless, many Britons are clearly comfortable with the breach of etiquette to post a status update on Facebook or to send a cheeky text to their bit of crumpet, even as the embalmed cadaver of the deceased lies before them.

Still, at least they're not playing Candy Crush. Or Z0MB1ES (on teh ph0ne). That would be in very poor taste indeed.

Source: The Co-operative Funeralcare | via Coolsmartphone
Woman with laptop in coffin image via Shutterstock