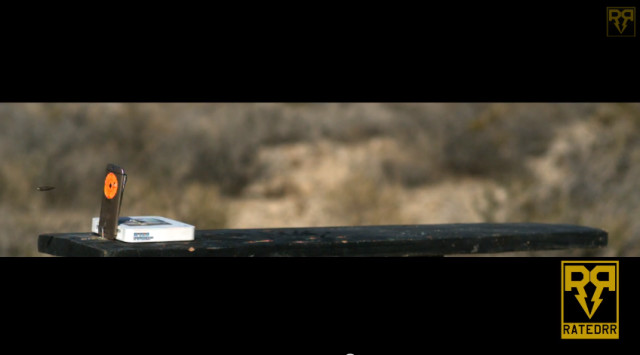 The first thing I'll admit is that in writing this article, I violated Betteridge's law of headlines. The answer to the title is, of course, no. No modern smartphone on the market can withstand a rifle round, not even the sturdy HTC One M8 clad in brushed aluminum and a Corning Gorilla Glass screen. But violently blasting apart the HTC One M8 is the obvious climax of stress-testing, an order of magnitude above our last reported stress test where the fine folks from PhoneBuff took the initiative to throw the One M8 to the ground and record the results.

This time, RatedRR's creator, Rick Ryan, takes to the range with his HTC One M8 and the Trackingpoint XS1 Precision Guided Firearm. The Trackingpoint XS1 is interesting in and of itself; the rifle is bolt-action, chambered in .338 and incorporates several unique features including a self-compensating tracking scope and WiFi access which allows a spotter to monitor the rifle via a custom mobile app. But the real story here is the pure misery which it inflicts upon HTC's One M8 smartphone.

This isn't the first time Rick Ryan shredded apart expensive hardware. Last year we wrote about his endeavors with a .50 cal and an Xbox One, and before that he upset many well-wishing Sony fans by destroying a Playstation 4 in a similar manner. And while the HTC One M8 can't play games as well as the PS4 or Xbox One, it's just as satisfying to watch it get blown apart.

You can watch the full video below, or check out a gallery of some of the damage. But if you're planning on defending yourself or your loved ones with the HTC One M8, you may want to consider a more viable option.