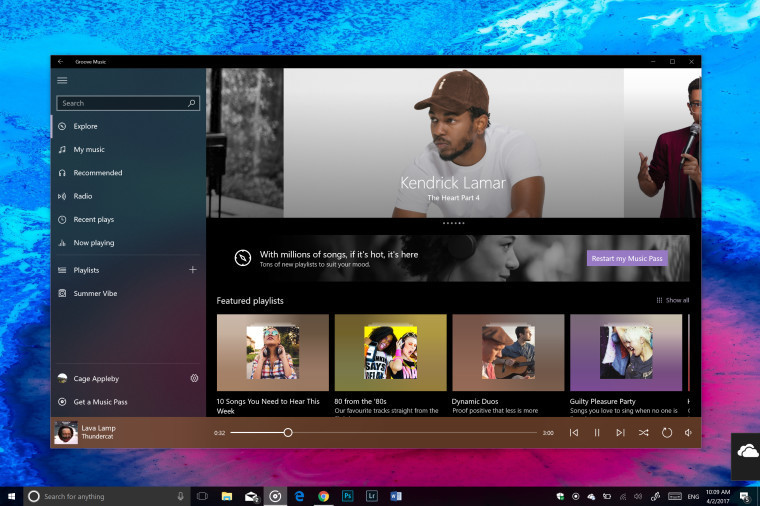 Microsoft has sent out a new update to the Groove Music app for Windows Insiders in the Fast Ring today which offers users an early look at the company's upcoming 'Project Neon' design refresh for the OS. We reported back in November last year that Microsoft was internally experimenting with an evolution of Microsoft's 'Metro' design language.

Since then, more information and concept designs have leaked offering a glimpse of what's to come. However, users have not had a chance to play around with the new design until now.

The new UI refresh is not intended to be a complete overhaul; rather, Project Neon is poised to reform much of the operating system's interface for one that is much more aesthetically pleasing.

Relying on blurred layers and sleek animations, the latest update to the Groove Music app removes the solid black or white colored sidebar for a more 'glassy' look. The new sidebar introduces translucency as well, revealing a blurred representation of whatever is beneath the app. If you look a little closer, the sidebar also appears to have a slightly 'grainy' texture, almost like frosted glass.

When Groove is not the main window, the new effects also switch off. It is important to note that this is not necessarily the final design, as we are still many months away until the full version of Project Neon takes full shape as part of the Windows 10 Redstone 3 update, expected towards the end of the year. Battery, at least with animations and effects is always a concern, so it is great to see that if you have Battery Saver switched on, the app reverts to its original design with no blur or translucency in sight.

Be sure to head over to the Windows Store and download the update if you are a Windows Insider on the Fast Ring, and let us know in the comments what you think!