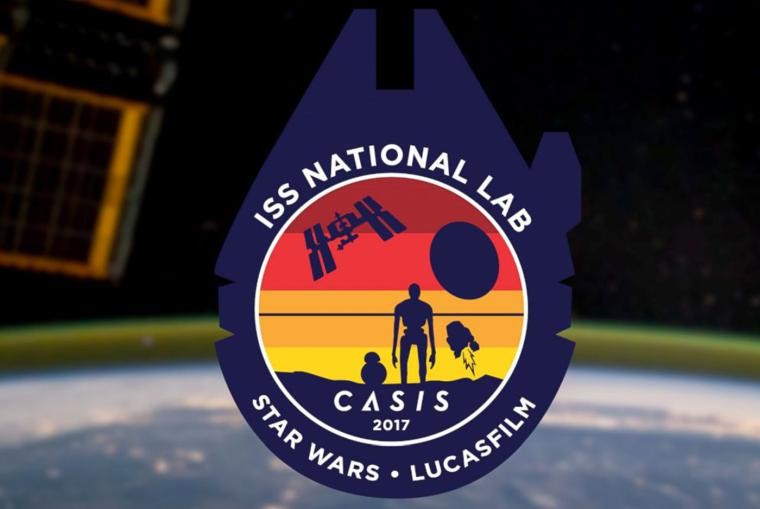 NASA's space program has always been the real life version of Star Wars, thankfully without the space battles. The movies offer a look at the future, what technology awaits, and the sense of adventure that NASA is putting into practice. So it isn't a surprise that NASA, partnered with the Center for Advancement of Science in Space (CASIS), just unveiled its 2017 mission patch for the International Space Station in a tribute to the classic film franchise of George Lucas.

The patch, created by Lucasfilm's Executive Creative Director Doug Chiang in conjunction with Kelly Smith and Stacey Vogel of Everly Design, is in the shape of the iconic Millennium Falcon, and shows the droids from latest Star Wars films, BB-8, K-2, and Chopper. The colors are meant to represent the twin moons of Tatooine, while the Death Star and ISS hang in the sky.

“When we design for Star Wars, we always strive to ground our technology in the real world in order to create an authentic science fantasy that makes science fun,” Chiang told ABC News. “Star Wars, to me, is the dream, and the ISS is the dream realized. I wanted the patch to evoke that spirit and inspire a new generation of scientists.”

Chiang said it would have been easy to use other Star Wars characters, but he wanted something that better represented a longing for adventure. "I thought it would be interesting to use three of our newest droids, each one representing the ideas of adventure, science, and hope," he said.

When NASA designed mission patches for previous programs such as Apollo and Skylab, they let the astronauts create the designs. But with the ISS, the agency has tried to collaborate with other partners to create patches that are representative of the research that will be going on at the station for that calendar year.

“It helps to bring visibility to the space station and educate people that it’s a working laboratory,” said Patrick O'Neill, marketing and communications manager for the CASIS/ISS National Laboratory. "And you can do unique research on the station that you just can’t do on the ground."

NASA patches have always been a great way to commemorate the astronauts and the various missions that are at the forefront of pushing futuristic research. Now we have one that combines fantasy becoming reality.