We have reported tons of rumors about what the next Xbox game console from Microsoft might have in terms of its CPU, its graphics and its new Kinect hardware. Microsoft has yet to confirm these rumors but plans some kind of major Xbox reveal on May 21st that could finally end some mysteries surrounding the next game console from the company. 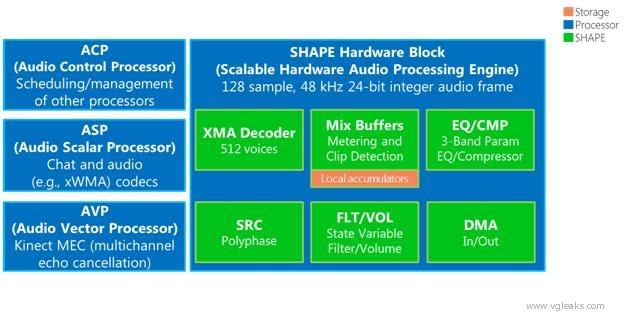 Today, a new report from VGleaks.com claims to have information, via unnamed sources, about the sound hardware and software that will be used inside the next Xbox, code named Durango. The highly technical article states that the SHAPE (Scalable Hardware Audio Processing Engine) block will handle most of the hardware chores for the next Xbox.

SHAPE operates on blocks of 128 samples, where each sample supports 24-bit integer resolution (or 32-bit float when used by the CPU). At 48 kHz, this represents a 2.67 ms audio frame, providing increased timing resolution and decreased latency compared with the Xbox 360 256 sample block size.

The article also claims that the next Xbox does away with any digital-to-analog converter hardware and software. All audio on Microsoft's next game console will be digital only, via HDMI 1.4a or S/PDIF optical output.  In terms of games, the article claims that titles made for the next Xbox can use two two audio rendering APIs. One is XAudio2, which is already used on the Xbox 360 and Microsoft's Windows operating systems; WASAPI  is the other game sound API that can be used by the console.

There's a bunch of other sound support details in VGLeaks's article but as always, we have to mention that none of this has been confirmed by Microsoft and that specific details could change in the months leading up to the next Xbox launch.