It’s no secret that Samsung and Apple aren’t exactly best friends these days. The two companies continue to lock horns, as disputes rage over patent infringements, with Apple doing its very best to get Samsung’s newest Android smartphones and tablets forcibly removed from sale in multiple markets.

So there’s something undeniably delicious about Samsung’s latest ad campaign – set to debut on American TV on Thanksgiving – which cracks more than a few jokes at the expense of Apple’s most faithful followers. It tracks the queues outside venues that are clearly meant to resemble Apple Stores, formed of people eagerly discussing the product that they’re awaiting. 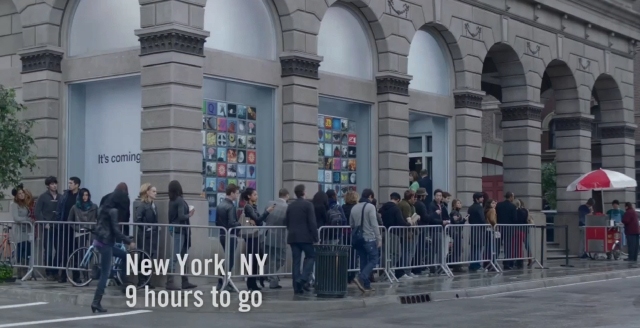 Neither Apple nor the iPhone 4S are mentioned by name, but there are plenty of clues indicating which product the ad is gently teasing; those in the queue make comments such as “If it looks the same, how will people know I upgraded?” while another guy, looking for info on the product online via his current phone, says “Uh-oh… the blogs are saying the battery looks sketchy”.

Everyone remains engrossed in their wait for the big product, until they spot other people outside of the queue carrying… you guessed it, Samsung phones – specifically, the Galaxy S II, which is getting a big promotional push in the US this holiday season.

“I could never get a Samsung”, says one of the hipsters in the queue, as he sits, tapping away on his notebook. “I’m creative.”

It’s a wonderfully cheeky ad that pokes a bit of fun at the overtly cool image that Apple has cultivated for itself – and Samsung has promised that more are on the way, debuting first on the company’s Facebook page. For now though, you can enjoy the first full ad right here: