A few days ago, a video featuring Microsoft’s Joe Belfiore – intended for use within the company and among its hardware partners – revealed a huge amount of information about its next-generation mobile operating system, Windows Phone 8, also known by its development codename, ‘Apollo’. One of the juiciest details uncovered was that the new OS would bring much broader “scale and choice” on the hardware side of things.

In addition to support for multi-core processors and removable microSD storage, four new display resolutions were also promised. Information highlighted by TechRadar appears to offer the first hints at new form factors that will soon populate the Windows Phone ecosystem. Albert Shum (pictured below), who heads up Microsoft’s Windows Phone Design Studio, appeared at a Nokia event and previewed the expansion of today’s Windows Phone expanding into a varied range of devices, alongside larger Windows 8-based tablets and PCs. 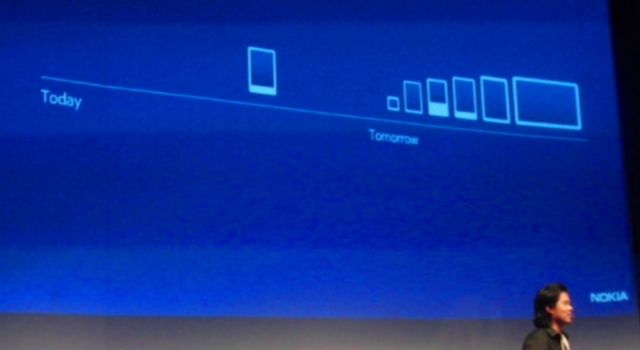 The slide previews six form factors that Nokia will apparently be developing with Microsoft operating systems. It appears to confirm the inclusion of a Windows 8 tablet device (not Windows Phone 8, as Microsoft has explicitly ruled out its phone OS being used on tablets) on the Nokia roadmap, along with a larger touchscreen phone handset with no hardware buttons (perhaps competing with the 4.7” HTC TITAN 2 Windows Phone and 5.3” Samsung Galaxy Note Android handset). It’s likely that larger displays will also usher in higher resolutions, including high-definition support; currently, only one resolution – 480x800px, or WVGA – is available for Windows Phone device manufacturers.

Three smaller form factors are also revealed here. A smaller touchscreen – presumably with a lower resolution display – is shown; this will likely be a new class of lower-cost Windows Phones designed primarily for developing markets, and which are expected to be launched later this year with the next interim update for the OS, codenamed ‘Tango’. Another new form factor is one that has a fixed hardware QWERTY keyboard below the display (similar to most BlackBerrys, or Nokia’s E6 Symbian phone).

Perhaps the most interesting new form factor is the smallest one of them all. This appears to be an ultra-compact device with a display of between one and two inches in size. Could this be some sort of Windows Phone version of Apple’s iPod nano?

While there’s no indication of exactly when these new devices will materialise, it’s exciting to see that Microsoft and its partners already have a clear idea of how they’d like to expand the Windows Phone ecosystem alongside that of Windows 8, as the company's operating systems for phones and larger devices grow closer together.

Image from Nokia event via TechRadar