The big day is close at hand for Microsoft's official reveal of the next Xbox on Tuesday. The company is finishing the assembly for the massive tent on its Redmond, Washington campus that will soon house a relatively small invited press corps and other guests. 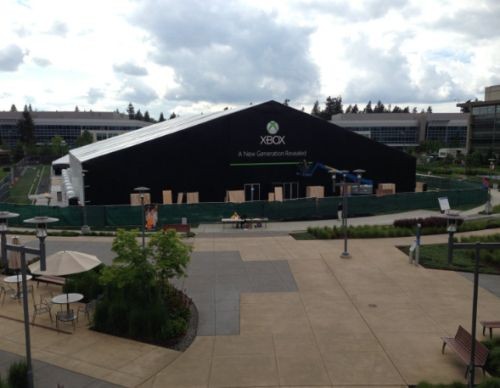 Microsoft's Larry Hryb took to his Twitter account late on Sunday to post a new image of the Xbox Reveal Tent, now almost completely assembled on the outside. Hryb has already said that we won't get to see what's going on inside the structure until the big day on Tuesday.

Unfortunately, the people who have to go inside the tent for the big announcements might get a little damp while they wait. The current forecast for Tuesday in Redmond is calling for a 70 percent chance of rain, which is not that surprising for the Seattle area. However, the unofficial (but still funny) Xbox Reveal Tent on Twitter is taking it all in stride, stating:

I've got my poles crossed for sunshine & blue skies the next 48hrs. But either way the folks inside me will be dry & full of awesome on 5/21