Yesterday, we reported on the latest details to emerge on the Lumia 928, a variant of Nokia's Lumia 920 which is soon to launch on Verizon in the US. As has recently been revealed, the new high-end Windows Phone is expected to be lighter than the 920, eschewing the dense and weighty polycarbonate body of that device, in favour of a lighter aluminium shell.

Further details continue to emerge, with iTechPost reporting that a dedicated pop-up site for the new handset - nokia-lumia-928.com - has obtained a snap from Verizon's internal inventory system, revealing that the 928 will launch with four different colour options: black, white, red and - to the delight of many, no doubt - cyan. 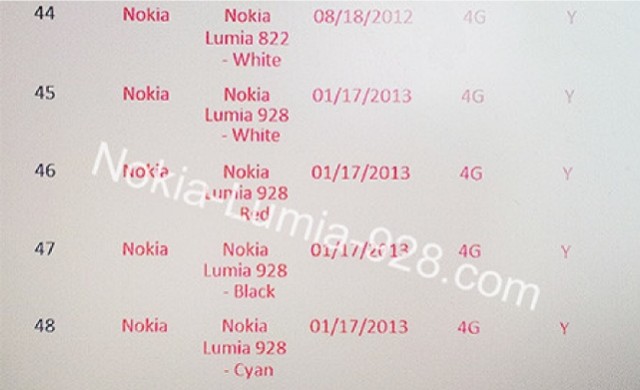 While the source of the information isn't exactly rock-solid, the image certainly appears to match Verizon's inventory system, and also corresponds to an earlier image that we reported on at the beginning of this month. The source of the more recent leak claims that the 928 will launch "around the same time" as the new Samsung Galaxy S IV, which is due to be announced later today.

The Lumia 928 is expected to have a similar PureView camera to the one seen in the 920, although it may feature a xenon-based flash rather than an LED. An image apparently taken by the 928's camera surfaced yesterday.