Just a few days after Nokia announced UK launch details for its giant 6-inch Windows Phone, the Lumia 1520, the company has now revealed details of pricing and availability there for its first Windows tablet. 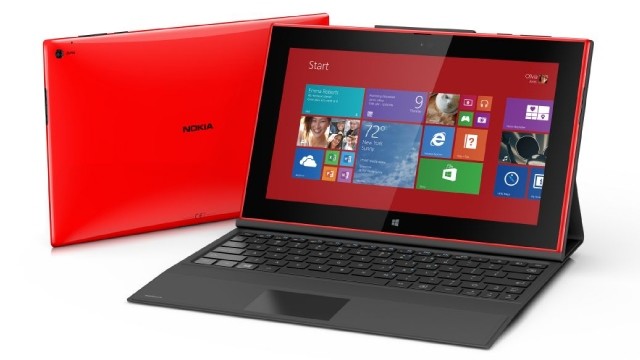 The Lumia 2520 will launch in the UK on December 4, and will be exclusively available from John Lewis department stores. John Lewis, you may remember, was also the first UK retailer to offer the Surface RT in its stores.

Nokia's new Windows RT tablet will go on sale for £399.99. The Power Keyboard Case, which connects to the device and extends its battery life by up to five hours, will also be sold at John Lewis, but will not be available immediately; Nokia says that it will arrive "in the coming weeks", and will cost £149.95.

The Lumia 2520 will be available in four colours: glossy white or red, or a matte-finished black or cyan. While the device includes a SIM slot for 3G/4G connectivity, those who were hoping that they would be able to pick it up at a lower price with a carrier subsidy will be disappointed.

Those willing to pay the full price will be getting their hands on a device with a 10.1-inch Full HD (1920x1080px) display protected by Gorilla Glass 2, as well as a 2.2GHz quad-core Qualcomm Snapdragon 800 processor and 2GB of RAM. 32GB of onboard storage is available, as is a microSD slot, supporting cards up to 64GB.

A 6.7MP rear camera with ZEISS optics is included, along with a 2MP HD wide-angle front-facing cam. An 8120mAh battery offers up to 11 hours of video playback, and standby time of up to 25 days. A full list of specs is available on the Nokia site.