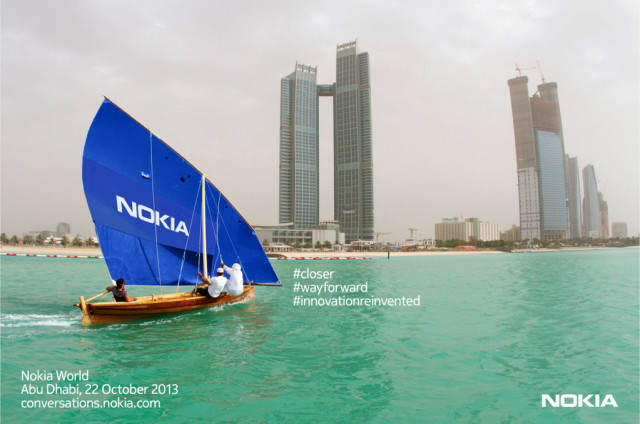 Nokia has held its annual Nokia World event in many cities around the world over the years, and even though the company is selling part of itself to Microsoft very soon, it will still hold the 2013 edition in an exotic location. Today, the company revealed that Nokia World 2013 will be held in the ultra-modern Middle Eastern city of Abu Dhabi.

The official announcement on Nokia's blog doesn't offer any more information other than the city and the date, which is October 22nd. However, it's almost a given that Nokia World will be the place where the company will announce what may be their final mobile computing products; the 6-inch Lumia 1520, and the highly rumored Windows RT tablet, which some reports claim will be named the Lumia 2520.

It's certainly an interesting place to hold a press event like this, and it comes at an interesting time for Nokia as a whole as it will be making the transition to moving away from the mobile and smartphone business. Indeed, we wouldn't be surprised if Nokia World 2013 will be the last such event that the company will hold before Microsoft closes on acquiring its Devices and Services divisions in the first quarter of 2014.