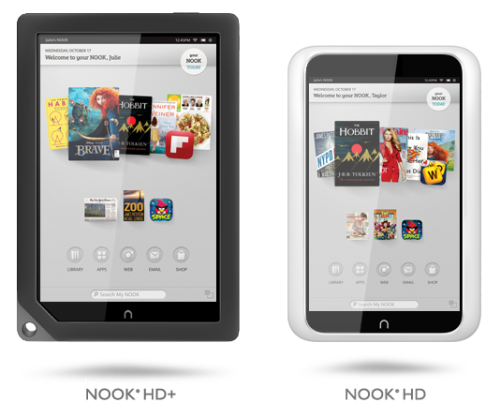 Barnes and Noble has announced new versions of its Nook tablet today, the 7-inch Nook HD and 9-inch Nook HD+.

The Nook HD's 7-inch screen features a 1440x900-resolution display and is also extremely light, weighing just 11.1 ounces. In terms of performance, the Nook HD will feature a dual-core 1.3GHz ARM processor and 1GB of RAM. Battery life tops out at 10.5 hours on the new tablet, the company said. The Nook HD will come in two versions, an 8GB version that costs $199 and a 16GB version that costs $229.

Barnes and Noble's first 9-inch tablet, the Nook HD+, has a 1920x1280-resolution display that is "fully laminated" to reduce glare and provide improved viewing angles. Like the 7-inch version, the Nook HD+ is one of the lightest tablets of its size, weighing just 18.2 ounces. Battery life is slightly shorter than the Nook HD, as the company says the larger tablet will last up to 10 hours. The Nook HD+ has a dual-core 1.5GHz ARM processor, 1GB of RAM and comes in 16GB and 32GB versions that cost $269 and $299, respectively.

Despite the company's recent agreement with Microsoft, the new Nook HD tablets still run on the Android operating system. Both tablets feature a heavily modified version of Android 4.0.

Yesterday Barnes and Noble announced Nook Video, the company's new digital video distribution service, which will be included on both tablets. Nook Catalog will also be making its debut; that service will feature catalogs from retailers that will include information about products as well as direct links to their listings on retailers' websites. Additionally, the company said a revamped Nook Store and Nook Newspapers service will be available on the devices.

The Nook HD and Nook HD+ will launch later this year in the United States and the United Kingdom. The UK launch marks the first time the company has released its tablets or e-readers in an international market. Barnes and Noble has also announced that customers from the UK can now order the Nook Simple Touch and Nook Simple Touch GlowLight through the company's website.

Pre-orders for the new tablets are currently available on the Barnes and Nobles website for U.S. customers; UK customers will be able to pre-order the tablets in October. The Nook HD and Nook HD+ will be released Nov. 1.