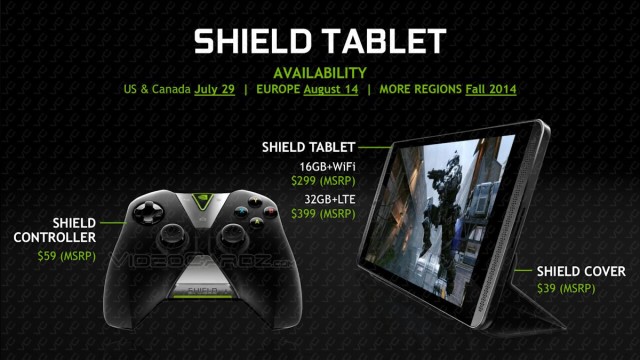 While there have been leaks about an upcoming gaming tablet by NVIDIA, this leak is probably the most comprehensive and detailed. The leaked documents shows the tablet, its specifications, and a couple of its accessories. This will be NVIDIA's latest attempt at a portable gaming device, a follow-up to last year's SHIELD.

According to VideoCardz, the site has obtained some interesting details and pictures of the unreleased SHIELD Tablet that will be launching on July 22nd, 2014. The tablet will be powered by an NVIDIA Tegra K1 processor, 2GB RAM, and have an 8" screen with a resolution of 1920 x 1200. Upon its release, there will two be versions of the tablet, a 16GB model that will cost $299 USD and a 32GB model with 4G LTE that will cost $399 USD.

If that wasn’t enough, the tablet will also have 5MP front and rear camera, dual front-facing speakers, and provide 10 hours of video playback. The device will also have its own wireless controller and tablet cover, sold separately, of course.

Although none of this is official yet, the SHIELD Tablet should arrive in the U.S. on July 22nd, with availability in Europe sometime in August 2014. Other parts of the world will have to wait a bit longer as the leaked material shows a vague, Fall 2014 release.