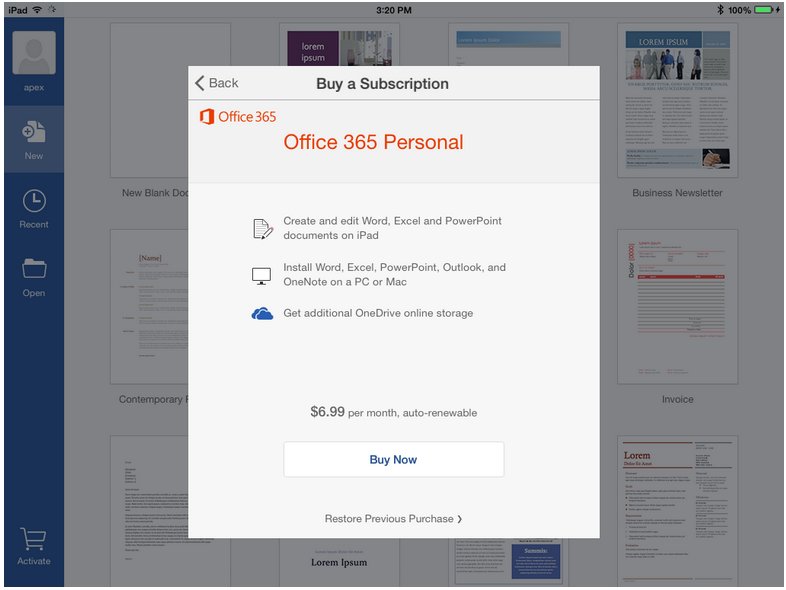 One of the rumored sticking points that resulted in Office taking some time to show up in the App Store was that Apple gets a 30% cut of the sales. It was supposedly because of this that Microsoft did not include this option from the start but, nonetheless, here we are with the in-app purchase now in place.

The in-app purchase makes sense as revenue is revenue right? That's likely the mindset that Microsoft adopted as they are committed to having their software on all platforms and opening up new revenue streams.

But using the in-app purchase option doesn't make a lot of sense, or cents either, as there are cheaper options available.

Using the in-app purchase feature, at a minimum, it will set you back about $84 to buy a subscription for Office 365 Personal. But, if you head on over to Amazon, you can get a personal subscription for Office 365 personal for $48, almost half of that of the in-app price. That works out to $4 a month and on top of that, you get 1TB of OneDrive storage too. That's a steal considering that 1TB of Dropbox storage will cost you $99 a year and that is only for storage.

The new in-app feature is now live but we would avoid it and go the Amazon route and use the extra change to buy a few beers and a subscription (that removes the ads) on Neowin.