In the U.S., the NFL exhibition season is underway and we are only a few more weeks until the Denver Broncos disappoint us again official NFL season starts. This week, the NFL and Microsoft have relaunched the official NFL Mobile app for Windows Phone 8 with a number of new features to prepare pro football fans for the next few months of pigskin action.

As the official Microsoft Phone blog confirms, the NFL Mobile app for Windows Phone 8 is now available for all owners of those devices; previously the app was limited to Verizon Wireless customers in the U.S. It gives fans full scores and schedules for their favorite teams, news from across the league and video highlights of each game after they are completed. If you have a fantasy football league that's run inside NFL.com, you can also manage your team's roster from inside the app. 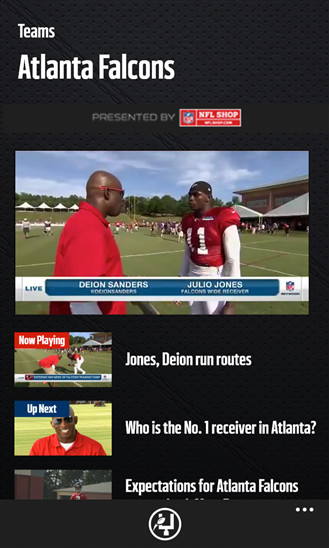 However, if you are a Verizon subscriber, you can still access some premium features on NFL Mobile, including live streams from the NFL RedZone cable channel on Sundays, and a selection of live full streaming games on Thursday, Sunday and Monday. The app also offers Verizon users live access to audio during games and more.

In May, Microsoft and the NFL announced a new multi-year agreement that will give coaches access to Surface tablets that they can use to check on video, stats and more. Microsoft has also said they plan to give NFL fans a "innovative fantasy football solution” and an "all-new viewing experience” but so far we haven't heard any details of how that will work.