The worlds most wanted man was killed yesterday and it appears that hackers quickly took advantage of the news by temporarily bringing him back to life in the form of malware.

Japanese Security Company, Trend Micro reported that criminals are taking full advantage of the news and have developed a piece of Facebook malware. The familiar chat virus was the first to spring up which read “watch the video of them killing osama bin laden live!” which came with a link to a Facebook page which would ultimately help you to infect yourself – how nice, nothing better than some self-infection. 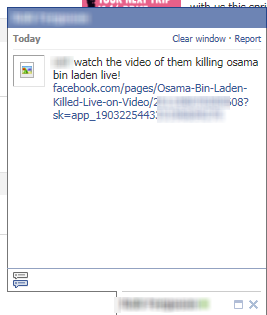 The page typically asks you to like the page, copy the video URL (which was actually a piece of JavaScript code) and paste it into your address bar - of course if you did that, you were a victim of the virus. The code that you’re actually pasting into your address bar calls upon a second file from an infected website and then progresses to infect all your friends by sending them the same Facebook chat message that you received.

The same method is used for the ‘See who views your profile’ type scams which also use the JavaScript code method.

Yesterday Neowin reported that a Twitter user was unwittingly reporting on the Osama details as they progressed. The announcement by President Obama happened hours after the Abbottabad based, IT consultant had become aware that Osama bin laden was living in his town. 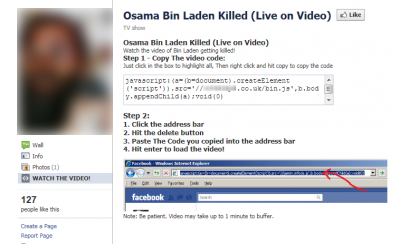