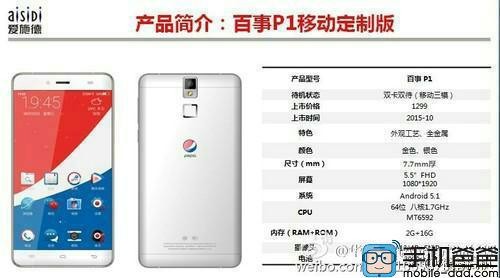 Pepsi. The brand that stirs up the quintessential image of a refreshing beverage may soon stir up something entirely different. According to a number of sites, Pepsi is apparently looking to jump into the tech world with a smartphone!

While this news may seem particularly unreliable, not only have a number of reputed sites begun talking about the rumors but Pepsi's official Weibo has also teased the phone. Sporting a 5.5-inch screen with a 1080p resolution and 13MP camera, the device is allegedly powered by a 1.7 GHz processor and 2GB of RAM. What's more, the phone, which is expected to be called the Pepsi P1, and is likely to cost only $200.

While it's a bit hard to swallow that a multinational food and beverage corporation would hop into this kind of venture, it is entirely more plausible that Pepsi has licensed its brand to a device manufacturer much like Nokia, outsourcing the design and manufacturing of devices to others. But, until full details of the device are revealed, we will have to speculate.

If true, however, the phone's low cost and Pepsi's brand recognition could prove to be a formidable recipe for success - or lead to a momentous failure.

Source: The Verge | image via mobile-dad