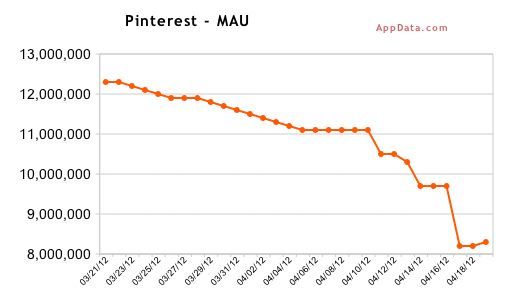 That is Pinterest, in a nutshell. The social network launched way back in March 2010, but its popularity only really increased in more recent history. In August 2011, Time Magazine named it as one of the Top 50 Websites on the internet in a poll which also included Whiskey Media's Giant Bomb.

By December 2011 Pinterest's popularity was such that it was one of the top ten most popular social networks on the entire internet. March 2012 saw it rise to the third most popular social network in the United States, surpassing business-oriented LinkedIn and Tagged to reach this point. Despite this, it received only +5% more growth during the month. In February it had an increase of 52% growth, and marked the first time since Time Magazine gave Pinterest their opportunity that the site had slipped, as SFGate observes.

There is evidence from Business Insider that the majority of Pinterest accounts are made by simply joining a Facebook account with the site. This would correspond with the number of Pinterest posts linked to Facebook. Corresponding with the drop, AppData have observed in Facebook-Pinterest activity. AppData monitor how frequently users of third-party applications link these applications with Facebook in order to measure activity. The monthly active dropped from 11.3 million to 11.15 million during March. Today, that number is hovering around 8.3 million, which is bound to be leaving Pinterest with a situation needing urgent attention.

For all the success Pinterest has had, the company has never really received a great deal of media attention. The early-adopters no doubt posted it on their Facebook, which would have helped boost its hits through AppData, but evidently these adopters have moved on again. Pinterest might decline further, which would be a disaster for a company that has enjoyed such a popularity explosion, or it could stabilize at a lower figure. This possibility assumes that some of the more ardent users enjoy.