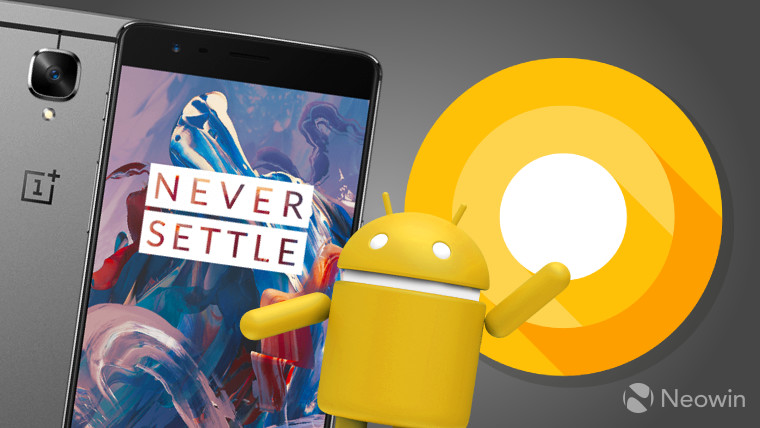 OnePlus has been enjoying plenty of news coverage lately, following last week's launch of its new high-end handset, the 5. With the older OnePlus 3T recently reaching the end of its retail life, the company said it would continue to deliver more software updates to that device, and its predecessor, the 3.

Last month, OnePlus CEO Pete Lau told customers that both the 3 and 3T will be upgraded to Android O, the next major version of the OS. Google hasn't yet announced a firm release date for Android O, but it's expected to begin rolling out to supported Nexus and Pixel devices in early August, roughly a year after Android 7.0 Nougat's rollout began.

During an AMA (ask me anything) session on Reddit this week, many owners of OnePlus handsets asked the company when it intends to bring Android O to their devices. Unsurprisingly, OnePlus didn't commit to a specific date - or even a specific month. A representative for the firm simply stated that the "3/3T will get Android O update within this year" [sic].

It's perhaps telling that the only reply to that statement, from a OnePlus 3 owner, was filled with doubt regarding the company's promise, even pointing out that they had captured a screenshot of it for future reference:

I took a screenshot of this because of obvious reasons ;) I REALLY hope my OP3 (which I love) won't be abandoned now, like the OP2. Another question, when will the fixed touch latency come to the stable build? It's been in beta for about 3 months now..

OnePlus previously broke a similar commitment to its customers; in June 2016, a company representative said that the OnePlus 2 "will get the N update", which later became known as Android 7.0 Nougat. That update never materialized, and the company simply ignored the frustrated complaints of OnePlus 2 owners, before finally admitting two weeks ago that it has no intention of bringing Nougat to that device - a full year after it had promised to do so.

OnePlus also said it would upgrade the 3 and 3T to Android 7.0 by the end of 2016. It wasn't kidding - the company didn't begin its rollout until literally the last few hours of the year. If OnePlus stays true to form, it could be another six months before it delivers Android O to the 3 and 3T... assuming it keeps its promise.