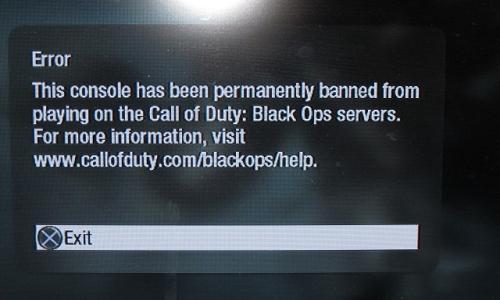 A number of Call of Duty: Black Ops gamers were in for a big surprise this week after a recent PlayStation 3 update banned players for hacking or cheating.

As reported by VideoGaming247, Sony released firmware version 3.56 yesterday, adding a "security patch" to the console. Once detected players are presented with the above message informing them that their console has been permanently banned from the Call of Duty: Black Ops servers.

Despite the fact that the new firmware was hacked within hours, the update represents a significant milestone in the fight against the game's numerous cheaters. The outspoken among those affected have been contesting their innocence with topics of banned consoles appearing across the official Call of Duty: Black Ops forums.

The following are just a few of the posts:

How long am I banned for?

"This console has been permanently banned from the Black Ops servers….."

Does this mean forever? Or will I be unbanned after awhile?

When i want to play black ops it says my console is banned permanently???i have payed 150$ for the Ps3 (i bought it yesterday (used) and just came home with a new copy of b-ops! but why is my system banned?

I dont know what happened i was just playin it normally. i installed the patch and played for a while and I went to have my shower and when i came back i was permanently banned! Somone please get me unbanned! It might of been my frineds though because i lent him my ps3 a couple of days ago because his ps3 got YLOD…

Today i got my account back finally an It wont let let me play online idk why it says prem ban i didnt do anything man i miss black ops well looks like i have to get a 360.

Hi i understand all of then terms and conditions of playing call of duty black ops, but my PS3 has been banned.. and i dont understand why? there a few people here who play online in this house but none of us can anymore. how can i get some help? or who do i need to contact.

Whether the claims of innocence are legitimate, it's clear that Sony's new firmware means a zero tolerance policy for cheaters.