Windows 11 is getting closer to its first feature update, which should bring some much-needed improvements and features. Version 22H2 is now available in the Beta channel, where Microsoft ships more stable builds with fewer bugs. That means more users are ready to jump from a stable build to a preview.

Less experienced users and newcomers to the Windows Insider program might get a little puzzled by an unexpected side-effect: a permanent desktop watermark. Do not panic. These watermarks do not mean your Windows license is void. 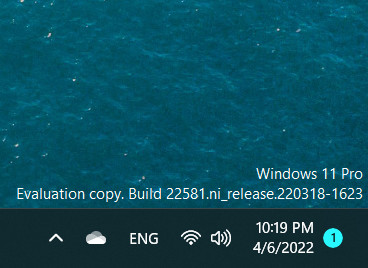 Modern Windows versions sometimes display permanent messages with critical notifications right on the desktop. For example, disabling signature enforcement will result in your system showing a "Test Mode" message in the bottom-right corner. Also, Microsoft uses desktop watermarks to notify users of older hardware that their computers do not meet the minimum hardware requirements to run Windows 11. Finally, Windows copies without valid license keys show a reminder to activate the OS.

In the release notes for the latest build 22593 — now available in Beta and Dev — Microsoft clarifies that early versions of Windows in the Insider program do not change the licensing of your device. To ensure your Windows copy is still activated, do the following:

It is also worth noting that the Windows Insider program is not a loophole to get a free copy of Windows. You still need a valid activation key to keep the system running without interruptions.

Finally, Microsoft notes that you cannot use preview versions of Windows indefinitely. Early Windows builds in Dev, Beta, and Release Preview channels, unlike stable releases, have expiry dates, which means you need to update to a newer version or a stable build sooner or later.

Installing a preview version of Windows 11 will not break your license key. Still, you need to beware of bugs Microsoft is yet to fix. If you are not ready for potential software issues or instabilities, better stay on the stable release and wait for Microsoft to release the first feature update for Windows 11 in the coming months.