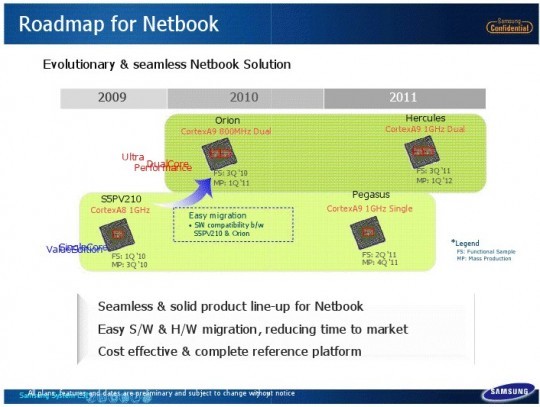 Leaked Samsung documents today confirm that multiple iterations of 1Ghz+ mobile CPUs are scheduled for mass production in the next few years. Included within the leaked roadmap is a 1.2Ghz quad-core ARM Cortex-A9 chip scheduled for a 2012/13 release.

The EETimes is reporting that the leaked document indicates that Samsung might be contemplating a switch from Intel to ARM chips for their low cost netbooks. Such a move would require a different operating system though (such as Android or Chrome OS), as Windows is x86-based. Samsung currently only incorporates ARM chips in their mobile devices and A/V equipment.