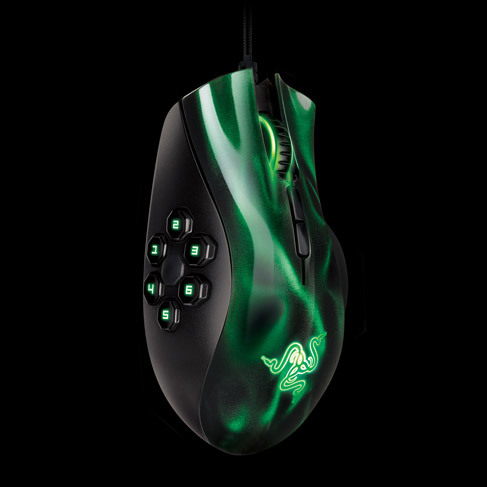 While Razer has been expanding its product slate for gamers with products like the wireless motion controller the Hydra and the upcoming Razer Blade gaming PC laptop, the company is still making new gaming PC mouse device. Today at CES 2012, the company unveiled the Razer Naga Hex, a new version of the previously released Razer Naga mouse.

The original Razer Naga mouse was designed for gamers that enjoyed massively multiplayer online titles with a whopping 12 buttons on the mouse's thumb grip. The new Razer Naga Hex is being made for gamers who enjoy action-RPG games such as the upcoming Diablo III and the action-RTS games (also known as MOBA games) such as League of Legends, DOTA 2 and Heroes of Newerth.

The mouse now has "just" six buttons on the thumb grips. Each of the buttons have been made with special switches that Razer claims will allow gamers to perform action "of up to 250 clicks per minute." The Naga Hex has a total of 11 buttons, all of which can be custom programmed for your specific game and game playing style. It also support's Razer's Razer Synapse 2.0 cloud system which allows gamers to save their mouse configurations on a remote server.

The Razer Naga Hex will start shipping in late January from pre-orders made on Razerzone.com and will be in retail stores in March for the price of $79.99.