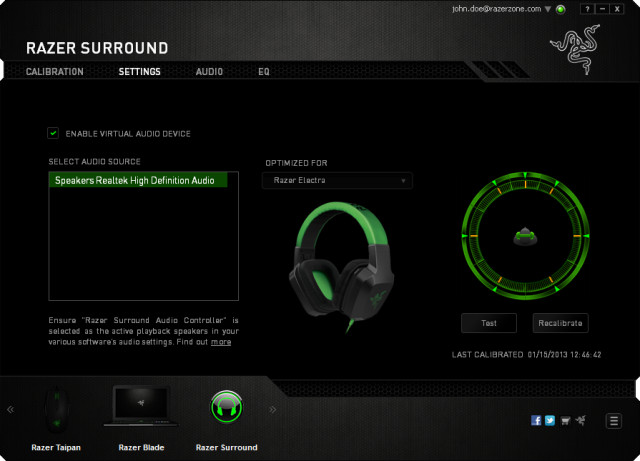 Last week, Razer promised to offer up a "Revolution" and today their teaser campaign ended with the reveal of a new product: Razer Surround. It's a Windows-based software program that promises to offer some extra features for any stereo headset.

With the patent-pending Razer Surround audio engine, users have the option to calibrate their personal surround sound settings through a series of listening tests to match their preferences, giving them far superior positional sound over traditional virtual solutions. Razer Surround gives gamers a truly individualized 7.1 surround sound and attuned 3D audio experience, allowing them to acoustically pinpoint exact locations of opponents in game, providing “the unfair advantage” in gameplay.

Razer says the new program will also be integrated with its Razer Synapse 2.0 application that will allow its users to store any Razer Surround settings on a cloud server. The program also has pre-calibrated settings for all of Razer's own headset products.

The program is normally priced at $19.99, but from now until January 1st, 2014, the company is offering Razer Surround for free for Windows Vista, 7 and 8. However, anyone who downloads the software will by given an option to donate any amount to the Child's Play charity.