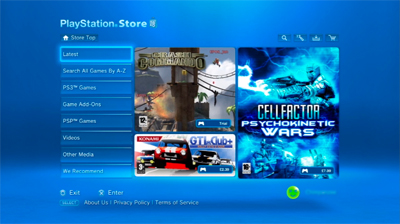 While a number of features on Sony's online Playstation Network have been restored since the online service first started coming back online last Saturday night, one big feature that hasn't been brought back is  the Playstation Store. Today Gamaustra reported that it had received an memo that Sony sent out to its development partners announcing that, at this moment, the Playstation Store will be back online on Tuesday May 24. The note came from PSN content manager Jack Osorno who said, "We thank you for your patience as we work to resume service of the PlayStation Store".

If it does come back online on May 24, it will be nearly four weeks since its been operational. The entire Playstation Network was shut down by Sony on April 20 due to a cyber attack on the network's servers. On May 24, the Playstation Store will also contain a content update of games, demos and other material that was scheduled to be released on April 26. May 27 will see another batch of new content for the story that was originally scheduled for release on May 3, according to the story. Additional content additions will be added on May 31 and June 3 which should return the Playstation Store back to its originally planned schedule. Some games and content might have their releases changed with Osorno saying. "Adjustments will be made on a case by case basis."

As we have previously reported, Playstation Network users will be able to get free content from the Playstation Store once it comes back online as compensation for the downtime. That will include being able to download two PlayStation 3 games for free along with two free PSP games, 30 days of free access to the Playstation Plus premium service and more.