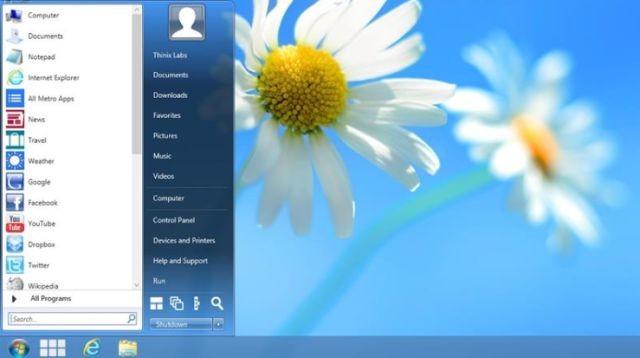 Developer Thinix was one of the first companies to offer a commercial Start menu addition to Windows 8 with the release of RetroUI Pro in September 2012. Since then, Thinix has released several updates for the program but this week the company launched version 4.0 of RetroUI Pro which finally offers full compatibility with the recently launched Windows 8.1.

Aside from supporting Microsoft's newest OS update, RetroUI Pro 4.0 offers up a few changes and bug fixes, such as an update to its multi-user profile technology, some new Modern UI app icons and colors and more. Version 4.0 is not compatible with Windows 8. Users who have downloaded and installed previous versions of RetroUI will have to uninstall them before using RetroUI Pro 4.0.

The software comes in 32-bit and 64-bit versions and users are advised not to install the 32-bit port to a 64-bit Windows 8.1 PC as it will not work. Thinix is still offering a seven day free trial of RetroUI Pro 4.0; after that, it will cost $4.95 for a license to use it on one PC, or $9.95 to activate it on three PCs. There are also other pricing tiers for business and education use.