Gears of War made its debut on Xbox 360 back in 2006. I still remember heading over to my friend’s house the day it launched and playing through the campaign together. I recall the overwhelming joy that came over me when I made my first chainsaw bayonet kill. I remember the fear and anxiety that hammered my body during my first Berserker encounter – I screamed like a girl as I frantically dodged the charging Locust beast repeatedly, and I loved every moment of it.

That’s what Gears has been for me: a series of good memories and fun, over-the-top moments with beef-headed soldiers that would always make me think of the franchise in a positive way. When I heard that Gears of War 4 was officially in the making, I wasn’t sure whether to be joyful all over again or worried that it could all come crashing to the ground.

Microsoft bought the rights to Gears of War from Epic Games after Epic decided that it didn’t want to proceed with the franchise any longer. Since Epic was out, Microsoft appointed its own internal studio, The Coalition, to pilot the Gears series going forward. Rod Fergusson, former studio director during Epic Games’ production of Gears of War games, joined The Coalition and became studio head. Knowing that some of the big talent behind the hit series was coming over to Microsoft, I had some small measure of confidence that Gears of War 4 would be at least a passable sequel. For anyone worried that this game won’t deliver: don’t be.

As good as Gears of War has been over its lifespan, it has always lacked a bit of natural feel to it. Characters were cool and recognizable but hardly relatable or believable in anything outside of great moments in combat. For instance, in Gears of War 3, Dom (spoiler alert if you haven’t played GoW3) finds his long-lost wife in a Locust stronghold, only to be found dead. Dom vents his anger by punching and slamming everything around him to absolutely no dramatic effect. For me, that moment encapsulates the series which has constantly been carried on its unique style of gameplay, letting the nuances that make a game great left unpolished. It was always a bit annoying to me, which is one way I think Gears of War 4 improves the series.

In Gears of War 4, you play as J.D. Fenix, the stubborn-minded son of Marcus Fenix and Anya Stroud – central characters to the previous Gears games. You’ll be accommodated mostly by Delmont "Del" Walker and Kait Diaz throughout the campaign and, almost always, you'll be happy to have them by your side since they're capable of doing at least a little bit of good and rarely throw out horrible one-liners. Between every Gears game, I rolled my eyes at the dialog the least in Gears 4 and I'm happier for it.

The meat-headed mentality of the core characters is mostly absent. Instead, The Coalition has given the cast a slight sense of sophistication and genuine appreciation for each other and what's going on around them. Even the occasional pun is much more enjoyable. It's details like these that can help elevate a good game into greatness, though this attention to detail isn't universally found within Gears of War 4.

With the new characters come new opportunities in telling a story while avoiding the "been there, done that" trap that sequels can so easily fall in to. Gears of War has never been boring but it has focused on the “shoot first, ask questions later” mentality plenty with each game. Gears of War 4 makes noticeable attempts to keep a good flow of action and progression in its story without jarring players with heavy uses of cut-scenes or unnecessarily slow moments between the fighting.

Another cool way the Gears mix gets freshened up is through the diversity of enemies you’ll encounter. Early on, you’ll encounter the Locust Horde from past games, but only through flashbacks that help setup the story for those that forgot what has happened or anyone that hasn't played a Gears of War game ever. Once the narrative catches up to current day status, you'll begin battling the COG’s new robotic army – different enough to have you reconsider your typical combat strategies. Play through enough of the campaign and you will again play against Gears 4's most intriguing enemy: The Swarm.

If you ask me, the Swarm are the most diversified and advanced group of enemies ever made in a Gears game. Instead of mostly sluggish, brutish Locust, The Swarm are typically fast, agile and capable of packing quite the punch all at the same time. If you’re not careful, several types of enemies are capable of closing ground fast and forcing your combat into close quarters before you have a chance to swap weapons. There's no doubt that, for me, The Swarm are the best enemy ever encountered in any Gears game. They're formidable, freakish, tough and I loved confronting them more as the campaign progressed.

Speaking of the campaign, Gears of War 4's makes a case for one of the best of the series, if not the best. The pacing is great, the characters are new and improved, the enemies are varied and fun to fight against and the narrative is better than expected for a higher-numbered sequel. Coming from a place where I didn’t expect Gears of War 4 to be the important heavy-hitter Microsoft hoped it’d be, I’m happy to have my fears and reservations pulled from me just with the campaign side of the game, which still supports local and online co-op (if you weren't already aware).

If you’re only playing Gears of War 4 for the story, you’re only getting 1/3 of the game. As Gears faithful are fully aware – these games are just as much about competitive and cooperative multiplayer as they are about campaigns. Gears of War 4 brings along the competitive multiplayer (Versus) and a new Horde 3.0 mode – both of which borrow heavily from the past and add in a few flavors of change.

If you’re jumping into the Versus playlist, expect much of what you’ve already seen before. Many of the weapons are the same as other Gears games, with a few exceptions here and there. Many of the game modes are the same. There are a couple exceptions, one of which is the new Dodgeball game-type: a team deathmatch variant that enables you to bring back dead players by killing an enemy. It’s a reinforcements volley that, if played by equal skilled players, can last quite a while and lead to epic standoffs. These deathmatch-centered games are what you can expect from within the Versus playlist.

You will encounter two objective-based games in the way of Escalation and King of the Hill. Should you prefer to be rewarded for your performance with objectives rather than your combat skills alone, these game-types will serve you well. Yet, that's all you're going to get in Gears 4 until The Coalition potentially update the game to branch things out. Perhaps it’s for the best – this is a game that is focused on the thrill of fast-paced combat in limited spaces, even if that approach will turn a few gamers along the way.

Other than the slight tweaks here and there, Versus games are largely the same as they have been in the past, leaving Horde 3.0 to try and shake things up, and it does. What has changed in Horde 3.0 compared to previous Horde modes are two things: the types of enemies encountered in Horde matches (because they appear in the campaign) and the new class-based system. The Swarm will be a thorn in your side and can be combined with the COG robot army, making for a heavily varied match of mayhem.

As previously stated, there are classes you will assume in Horde 3.0 to make you a better contributor in certain ways. A good Horde team diversifies its class set to better serve the team. Stacking damage-dealing classes can leave you at a significant disadvantage as you progress deeper into the waves of Horde. If you can't slow down the enemies or get yourself high-grade turrets, things will get out of hand rather fast and force you to take it from the top after failing.

If you’ve never been a motivated competitive player in Gears of War, perhaps you’ll make a decent team player in Horde. Like a group of Guardians on one of Destiny’s Strike missions, Horde 3.0 has you playing with people instead of against them which can make this game come off quite different from other modes of play. Horde 3.0 also utilizes a leveling system that will reward players that spend quality time in the playlist, helping make your playable classes more advanced, which helps you make a greater impact in the thick of Horde combat. 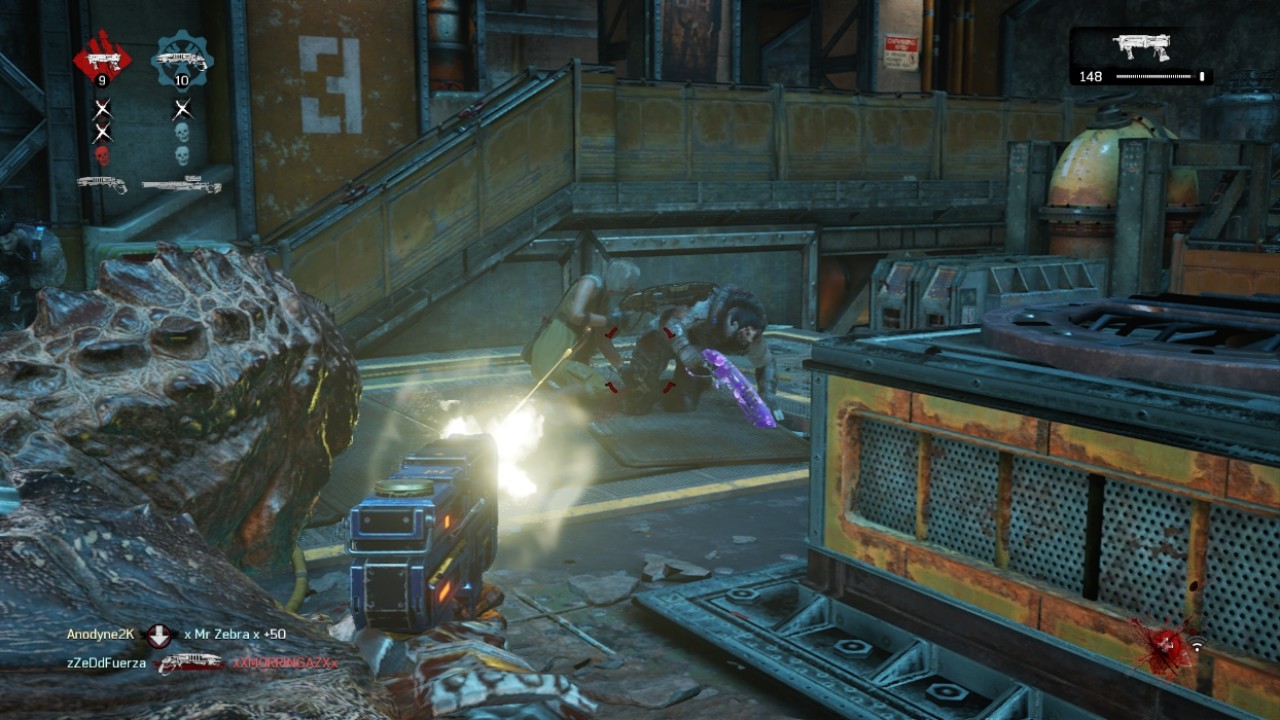 So where does that leave the package as a whole? Gears of War 4 does so much so well, whether that be its new campaign and enemy, a slightly re-touched Versus mode or the bolstered Horde 3.0. It all works and looks so nice, partially thanks to maintaining both a 1080p video output and 60FPS throughout the game. Combining those technical achievements with beautiful and varied environments to play through make Gears of War 4 the best-looking game of the series by-far.

Mechanically, the game is solid. A few new/revised movement and cover mechanics can help players glide through their environments better than ever before. It never made me feel like the game was getting any faster or sharper in its execution, only touching it up slightly. Then there's the learning curve for Gears of War 4, which is just as steep for the non-initiated as it has ever been (if not slightly steeper). That means anyone that absolutely loves the series will love this game and those that grew bored of it or walked away in frustration at any point in the past will likely find themselves doing the same.

In a way, Gears of War 4 is very much like Star Wars: The Force Awakens, in that it was made under new ownership and aggressively tries to be what its predecessors were. Gears of War 4 could have really made an impact for Xbox if more risks were taken to liberate the game from its ancestry but instead The Coalition kept things close to the source material. Perhaps The Coalition can push the next Gears title a bit outside of its comfort zone and make it feel totally fresh and on the forefront of gaming again. If not, I fear Gears of War will suffer the fate of Halo 5 and be another high profile game that collects dust on our shelves.